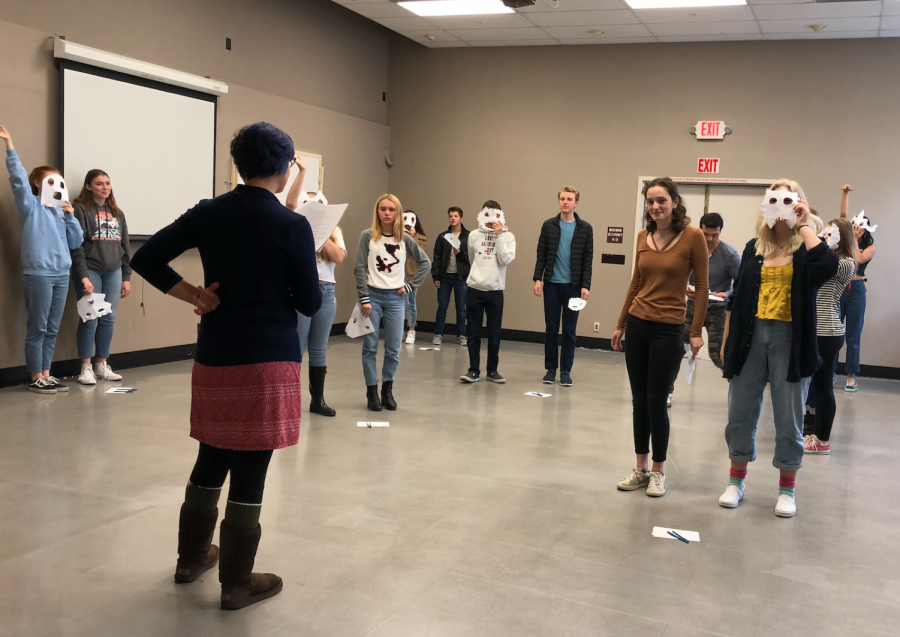 After watching plays put on by the Oregon Shakespeare Theater Company, students attended a workshop where they learned about the meaning and usage of maks in plays. They had the chance to work with actors from the company to create masks and practice using new acting techniques the actors introduced.

The idea for this trip was introduced to Theater Programs Director Margaret Gace Hee and Head of School Rachel Simpson by junior Anya Hilpert who wanted an opportunity for those interested in Shakespeare and performing arts to experience live shows in an unfamiliar setting.

“I’ve been going to the festival since the fourth grade,” Hilpert said. “I think it’s a fantastic experience and I wanted to share it with everyone.”

The sixteen students and three faculty members attended three plays: Alice in Wonderland, Mother Road and All’s Well Ends Well, put on by the Oregon Shakespeare Theater Company. Attendees also expanded acting skills at a workshop that explored the purpose and uses of masks in productions.

“My favorite show was Mother Road,” says junior Audrey Scott. “I thought it was a really meaningful show and I completely understood it.”

Aside from attending the plays, students had free time to explore the Ashland, allowing for shopping, trying new restaurants and visiting Lithia Park.

“My favorite part was getting to hang out with the people that I love, doing the thing that we all love,” senior Zoe Forbes said. “I’ve enjoyed knowing that everyone appreciated the trip and the experience.”

The trip was also an inspiration to the current cast of She Kills Monsters, Convent & Stuart Hall’s 2019 fall play, according to Hee.

“The students who are currently in She Kills Monsters reflected that the mask workshop was helpful in regards to how they approach their characters,” Hee said. “All of the characters in the play are in the midst of finding their identities and trying on different “masks” to explore who they are in relation to others.”

Future Oregon Shakespeare Festival plays are scheduled during March, May, June and July with tickets available to purchase on their website. The school hopes to host this trip again in upcoming years and students will be able to sign up via google form.

“The intention of this trip was to introduce students to a professional caliber of regional theater they do not often see,” Hee said. “It was also to show students that great theater can truly happen anywhere, even in a small town like Ashland Oregon.”