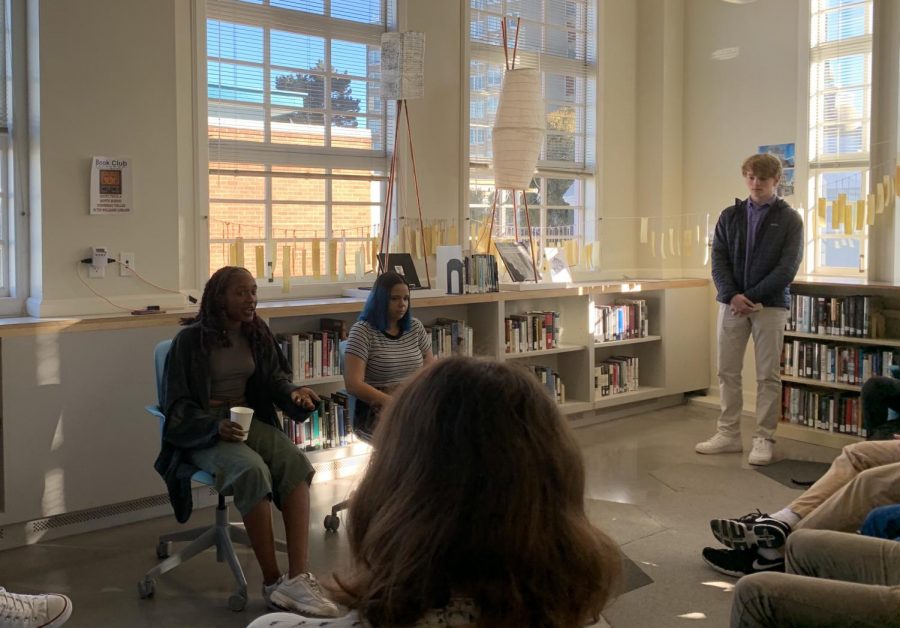 Guest speakers Bria Smith and Samantha Fuentes speak to a group of students in the Carroll Learning Commons. The event was organized by junior Cole Matthes.

WEB EXCLUSIVE Gun violence activists Bria Smith and Samantha Fuentes, a survivor of the Marjory Stoneman Douglas High School shooting, came to the Pine-Octavia campus to talk to a group of students about youth activism and issues surrounding gun violence in our country.

“I was really inspired about how passionate the speakers were,” sophomore Jennifer Surjadi said. “I now know that if I ever wanted to share some of my experiences, I have a supportive student audience.”

The two speakers opened up their talk to the students to ask questions about their experience or opinions with the solution for gun violence in the country. They also stressed the importance of standing up for injustices and the power that youth have to change real problems in the community.

“Something I found interesting was how much the media whitewashes the news,” sophomore Natalie Kushner said. “Mostly white students are depicted and shown in the interviews even though there are so many people of other races who have also been affected and have good things to say.”

While Fuentes talked about getting shot in the Marjory Stoneman Douglas High School shooting, she focused more on the fact that the shooting was just one of many and that there is so much work to be done. Both talked about how some shootings are represented much more in the press than the ones that happen daily in many communities.

“I learned that school shootings are actually not a huge portion of all the gun violence in the United States,” junior Audrey Scott said. “Suicides and other shootings are not talked about as much on social media even though it is a bigger problem”

They also talked about the documentary, called “Us Kids,” which focuses on the March for Our Lives campaign and the experiences of activists fighting for gun control reform.

“It’s really important that young people become more aware of what’s happening in the world,” Surjadi said. “Sometimes kids can be very sheltered to certain issues so I think it’s really good to have meetings like this.”