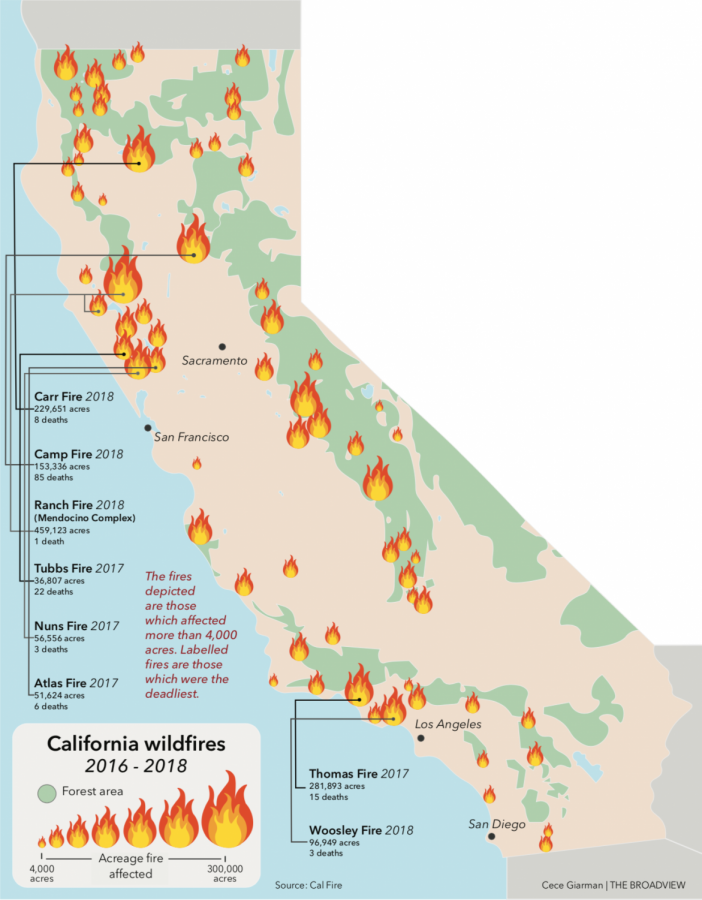 While the Camp Fire in Butte County made state history last month as the most destructive and deadliest fire to ever burn in California, scientists believe it is just one of the effects caused by shifts in Earth’s climate.

An increase in wildfire frequency is one of many possible repercussions of climate change, according to the Fourth National Climate Assessment released last month.

“Climatic changes, including warmer springs, longer summer dry seasons, and drier soils and vegetation, have already lengthened the wildfire season and increased the frequency of large wildfires,” according to the NCA assessment. The assessment estimates that climate change has doubled forest burned area in the western United States from 1984 to 2015.

“By warming areas, you’re going to create weather and natural events that occur more frequently like tornadoes and hurricanes,” biology teacher Denise Reitz said. “We’re increasing all of those natural events by changing the environmental chemistry.”

Of the 20 most destructive fires in California history, 14 fires occurred in the last 15 years, according to an updated list released by Cal Fire on Nov. 30.

At the top of the list is the Camp Fire, which burned 153,336 acres of land — over five times the size of San Francisco. Air quality in the Bay Area reached “Very unhealthy” levels in the mid-200s as a result of the Camp Fire, according to AIRNow.

“A lot of us don’t really pay attention to climate change because sometimes it doesn’t directly impact us, but it really impacted me when the Camp Fire happened,” sophomore Linda Karti said. “I have allergies and asthma, so I couldn’t really go outside.”

Cal-Adapt Climate Projections for the Bay Area include a one to three-inch decline in annual rainfall and an increased average temperatures in January and July by two degrees and four degrees, respectively, by 2050.

The report also predicts sea levels could rise as much 66 inches by 2100 and that the number of acres susceptible to flooding could increase by 20 to 30 percent in most of the Bay Area.

Climate changes cause the destruction and alteration of many natural resources, making the price of food and other necessities from these limited resources increase. Because of this, poorer populations will feel the effects of climate change the most immediately and devastatingly, according to Reitz.

“It’s going to always trickle down because most of us with means will be able to pay that extra price for a while,” Reitz. said. ”It’s the people who already are living on the edge who, as the cost of the basic needs of life increase because of fewer resources available, are going to be the most affected.”

Climate change’s effect on the future population is also significant, according to senior Emma Hubbard, who started the Environmental Action and Awareness club.

“Climate change will affect our generation much more than any of the generations above us, so it’s more important than ever that we are educated about what is going on in that we know all the facts,” Hubbard said. “Once we are all aware of what’s going on, then it’s up to us to use our knowledge to make a difference.”

Even if the emission of greenhouse gasses came to a complete halt, the effects of climate change will still affect future populations, according to NASA. The focus now is on mitigating the effects and adapting to them. “Conserve. Walk. Drive less, take public transportation,” Reitz said. “The biggest thing that people could do is unplug what
they’re not using. Even your chargers; if you have a charger and take your phone off and you don’t unplug it, it’s using electricity.”

The most important action is recognizing the scientific proof behind climate change, according to Reitz.

“The first step is acknowledging the science. Climate change is man-made and it is a fact,” Reitz said. “Until we have a government that will acknowledge that, yes, this science is true, we undermined science.”