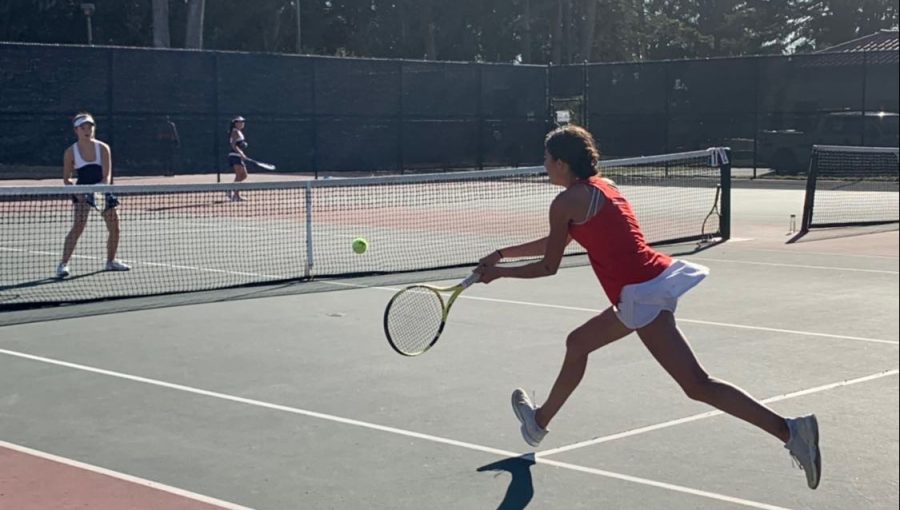 The team is undefeated and has beat competitive schools, already surpassing their final standing of last year’s season.

“I am feeling optimistic about our match against University since we have won against every other school so far,” sophomore Kelly Cronan said. “Even though we lost to University last year, I think we have a stronger chance this year as our team has improved.”

In practice, coaches have the players train in order to prepare for future matches. The athletes perform various drills and play a game called “Winner” at the end of every practice which is meant to improve footwork.

“Our practices recently have become more intense and challenging,” sophomore Roya Meykadeh said. “I think it is important and beneficial to train harder in the days leading up to matches, especially when the school is good.”

Convent’s varsity team lost three seniors who graduated last year, allowing for new people to join the team this season. This allows the lineup against University to be different, which may result in a positive outcome.

“I think our new lineup this season will help us have a better chance in beating UHS,” junior Bella Wasserman said. “Since we have a lot of new players on varsity this year, University’s team will not recognize the players and therefore will not know what to expect.”

The match will take place on Oct. 11 at the Alice Marble Tennis Courts. There will be three sets of singles, two sets of doubles, and an exhibition match depending on the number of players present.

“I am excited about the match and although it will be challenging, I think if our team works hard for the next few days we will have a chance,” Cronan said.