Students speak out for climate 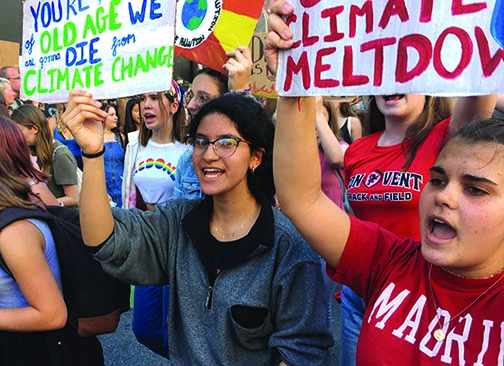 Bay Area youth gathered at the San Francisco Federal Building for the Global Climate Strike on Sept. 20 to raise awareness about climate issues and to demand a safe, healthy and just planet.

Thirty-five Convent and 13 Stuart Hall students signed out to attend the strike, according to the schools’ administrative assistance.

“The climate strike was the perfect way to make a statement to people in power,” junior Alliza Manayan said. “It was amazing to see so many young people stand up against corporations and leaders who must take action on this crisis.”

Youth marched on Seventh Street near the Financial District and stopped at corporate targets that are seen as contributing to the climate problems such as Amazon, Bank of America and PG&E.

“This strike was a wake-up call from the youth to adults, telling them to start treating climate
change like the crisis it is,” senior Marcus Williamson, who organized Convent & Stuart Hall students to go to the strike, said. “I think it’s important for youth to exercise our First Amendment right to protest because we are the future and climate change impacts our generation’s future.”

Approximately 2,500 events in 163 countries took place during climate week, Sept. 20–27, and were inspired by 16-year-old Swedish climate activist Greta Thunberg who travelled to New York from England on a zero-emissions sail-boat for the United Nations Climate Summit.

“I shouldn’t be up here because I should be back in school on the other side of the ocean,” Thunberg said as she addressed world leaders at the UN Climate Summit. “Entire ecosystems are collapsing and we are in the beginning of a mass extinction, and all you can talk about is money and fairytales of eternal economic growth.”

Thunberg went on strike by herself everyday for three weeks in 2018 in front of Riksdag, the parliament building in Stockholm, to protest the lack of action the government was taking to fix the climate crisis. A year
later, millions of young people began striking from school with her to demand climate action.

“The environmental situation is a very pressing issue because it is time sensitive and we must be conversational about it in order to raise awareness,” sophomore Lily Peta, who attended the strike, said. “I am also trying to make a conscious effort in what I consume and to use products that are eco-friendly.”

In addition to striking and protesting, some students are becoming vegetarian and vegan to reduce their environmental
footprint and are switching to more sustainable options for other purchases they make as consumers, according to Peta.

“The Global Climate Strike was a step in the right direction for this climate crisis, but we must take further action as youth and as human beings,” Manayan said. “Serious changes to our lifestyles must be made to combat this issue and we must be more conscientious about the choices we make.”