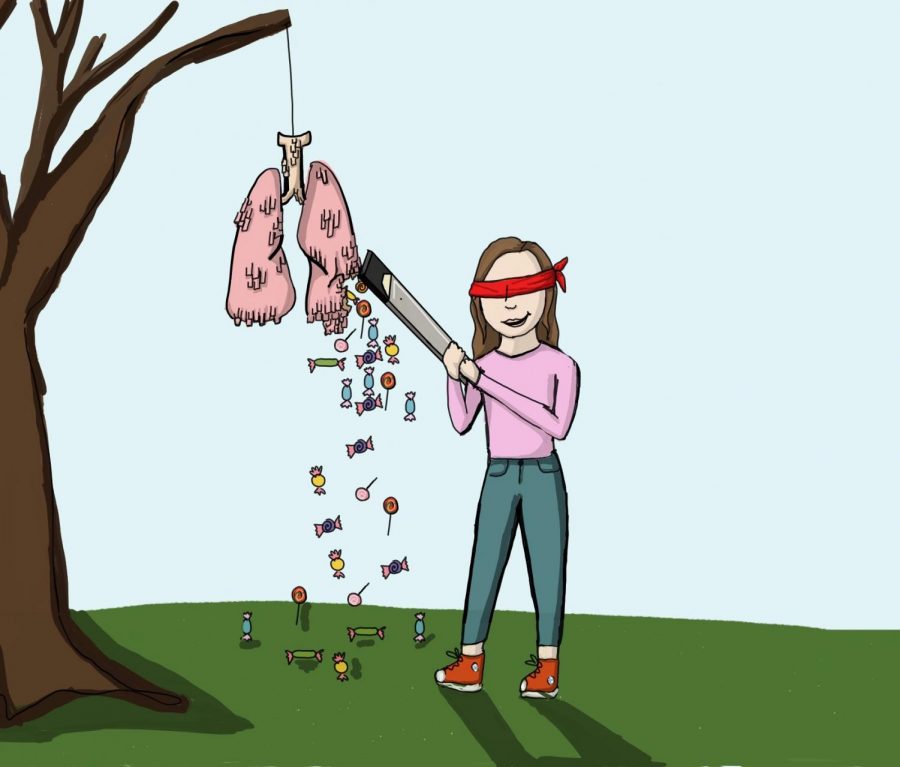 The Trump Administration announced a proposed ban on all non-tobacco vape flavors in an effort to address the teen vaping epidemic on Sep. 11. Although a ban on flavored e-cigarettes is a step in the right direction, there are more actions the government should take to keep the youth safe and healthy.

The Center for Disease Control and Prevention reported over 1,080 mysterious vape-related hospitalizations and 12 deaths in the last four months. Over 170 of these cases were minors treated for serious medical issues such as seizures, chronic bronchitis and high blood pressure.

Numerous reports by the CDC state that e-cigarettes are extremely dangerous, yet the rate of underage vape usage has continued to skyrocket in recent weeks. Vaping is not a “cool” trend to follow. It is dangerous and could be life-threatening.

Over 25% of high school seniors admit they have vaped at least once in the last 30 days, according to a national survey by the National Institute on Drug Abuse. Eighty percent of these students reported they started vaping with flavored products. Before the release of the Juul in 2013, only 4.5% of teens across the country reported using vapes.

Since Juul launched and released flavored pods, seven out of 10 teenagers have been exposed to e-cigarette ads on social media, television, and online, according to the NIDA.

With ads and marketing depicting models juuling at wild parties and posing with pod flavors such as mango, mint and creme brulee, it is apparent that e-cigarette companies are targeting youth and teenagers.

E-cigarettes and other nicotine-based products are far more addictive than combustible cigarettes due to their chemical composition, which increases the concentration of addictive substances, according to the CDC.

It is far too easy for minors to acquire addictive and harmful substances. The legal age to purchase any tobacco products in the state of California was raised to 21 in June, however, through the black market and social media, almost anyone can find a way to purchase combustible cigarettes and e-cigarette devices.

First-time users, especially teenagers, are attracted to e-cigarettes by the sheer curiosity of tasting child-like, sweet flavors. E-cigarette companies are well aware that no adult is attracted to the idea of smoking a fruit loop.

If flavored e-cigarette products are banned across the United States, millions of potential users would be safe from the temptations of tasting intriguing and addicting vape flavors.

Lawmakers’ decisions based on fixing this public health crisis should not be influenced by peer pressure or polarized political viewpoints, and should be supported by the common goal and well-being of the general public.

Flavored nicotine products are gateway drugs for other substances such as cannabis. Minors are 70% more likely to try other drugs and illegal substances after using flavored vapes and e-cigarettes, according to the NIDA.

Not only are these pod flavors fun and appealing to children, but severely misleading as well. Sixty-six percent of teenagers think that their e-cigarettes contain “just flavoring,” according to the NIDA. This seemingly harmless approach to underage users needs to come to a stop.

Lawmakers should be actively finding ways to crack down on dealers who supply minors with addictive substances and on the tobacco companies who target underage users so that the number of children hospitalized with lung diseases decreases.

A ban on flavors would not entirely solve this public health emergency because a nicotine addict is still going to crave, flavor or no flavor, however, it is certainly a step in the right direction.

This story was updated on Oct. 3, 2019 at 11:03 p.m. to reflect the latest statistics on the number of reported vaping injuries and deaths.