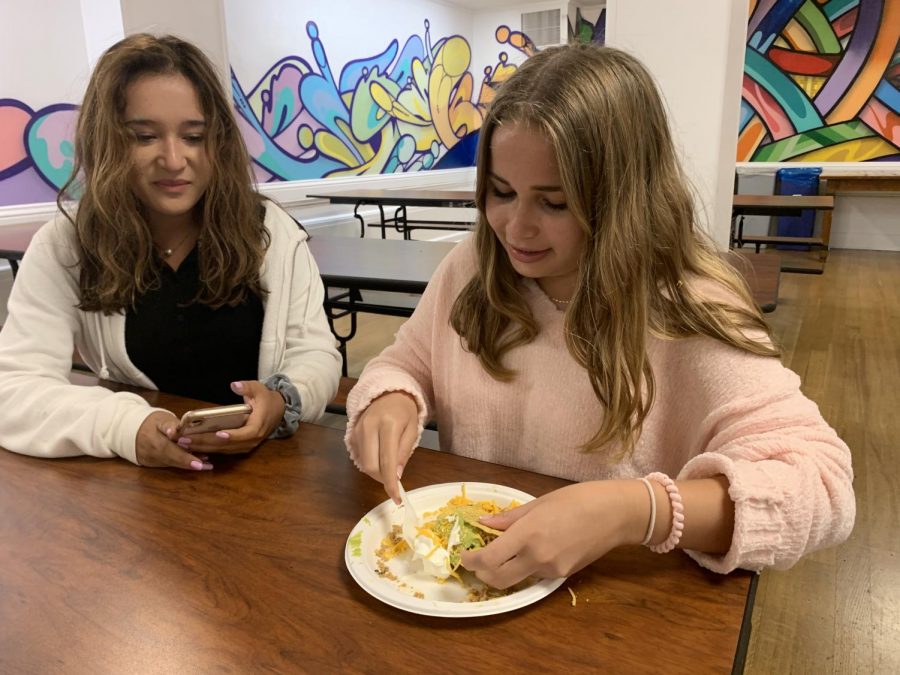 Sophomores Sloane Riley and Mira Chawla eat lunch during the second lunch period at Convent. The modified lunch schedule allows for two lunch periods based on the location of a student’s first afternoon class.

Students and faculty have been adapting to the new dual lunch period, as opposed to last year when there was only one lunch period for the entire student body. This year, all students have the Sage Dining Service providing them with the opportunity to remain on campus for lunch.

“The new lunch schedule will take some time to adjust to as I’m so used to the single lunch period,” senior Sofia Telfer said. “I hope that it will become a routine and that it will soon be easy to find out when I’m supposed to eat lunch.”

“I have had the later lunch each day so far and it has been a little hard since it’s a lot later than last year,” junior Alliza Manayan said. “It has been nice though because since the lunch is later, I don’t get hungry by sports practice.”

A student’s lunch period is based on the classroom number of their class proceeding B or F periods. If a student is in an odd classroom, they will have class first and then lunch, and vice versa for an even classroom.

“I have eaten at both Convent and Stuart Hall during both lunch periods and I think that the new lunch schedule works great,” sophomore Sara Ramelot said. “It is nice to be able to have an earlier lunch on a given day and a later lunch on another.”

Since the Columbus Room – the default cafeteria at Stuart Hall – is under construction, students can get food from the courtyard.

“Overall, I believe that the new lunch schedule will decrease the congestion in the cafeteria as only half the school has lunch at each time,” Telfer said.