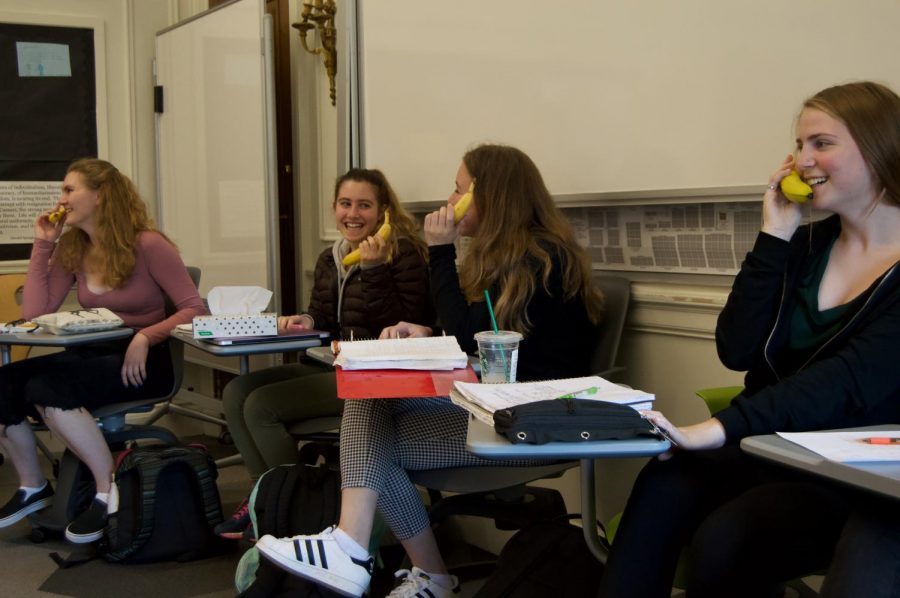 Sophomores ‘speak’ into their banana ‘phones’ as part of a prank on History teacher Michael Stafford organized by English teacher Angelica Allen. The students obtained their bananas before class began to be prepared for the prank.

“I started off pretty confused,” Stafford said. “When I realized what was happening I was able to have a good laugh about it.”

The prank was a reference to a running joke between sophomore English teacher Angelica Allen and Stafford that involves the usage of bananas as a substitute for real phones.

“There was one time that I had a banana in my hand and a student was trying to talk to me and I pretended that I was talking on the banana as if it were a real phone,” Stafford said. “I was able to pretend that I was having a conversation for quite some time. When I told Ms. Allen we continued to joke about it for a while and I guess she held on to it.”

At 1:00 p.m. during Stafford’s D Period class, an alarm went off signalling to students that Allen, who had been teaching down the hall, would soon be arriving in the classroom.

“It was my responsibility to have the alarm ring, so I wanted to make sure that no-one let the secret get out and that I didn’t accidentally start laughing and ruin the joke,” said sophomore Halsey Williamson.

When Allen arrived, students pulled out their bananas from concealed locations in their backpacks and proceeded to hold the banana to their ears as if speaking into a cell phone.

“I’d never pranked anyone before so it was terrifying on my end,” said Allen. “It could have definitely gone awry, but I was very impressed with my girls for actually bringing in their bananas.”

Allen organized the prank with her H Period sophomore English class yesterday after she realized that many of her students in were also in Mr. Stafford’s class.

“I was definitely very surprised,” said Stafford. “Today was our last official class so it was a really fun way to end the year.”