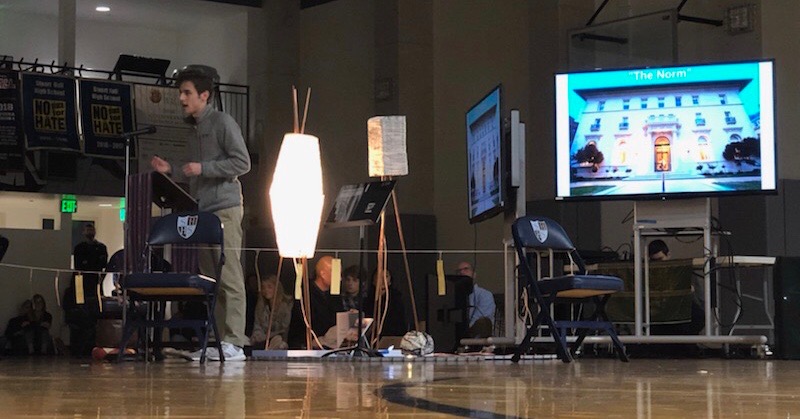 WEB EXCLUSIVE Both high schools gathered in the Pine/Octavia campus gym to hear the Morning Star Fellowship discuss their semester independent study on immigration in the United States and the internment of Japanese-Americans in San Francisco during World War II.

“The fellowship sought to illuminate the historical conditions reflected in the architecture of the Morning Star Building on the Pine/Octavia campus,” ethics teacher Michael Campos said. “We sought to establish a throughline from the design of this building to its location in Japantown and, in turn, Japantown’s more complex history with the internment and our larger national questions around citizenship.”

“Morning Star has since become, in the last twenty years one of our core elements in our high school experience,” Community Life Chair Paul Pryor Lorentz said. “It has a rich history that connects us with both San Francisco and the Japanese community.”

Earlier this semester, the Morning Star Fellowship travelled to the Manzanar National Historic Site, an internment camp that held Japanese-Americans, and to Angel Island.  Juniors Miley Sherman, Colette Hom, Adrian Vasquez, Casper Pratt and Joseph Weinstein who are part of the fellowship presented on their experience throughout the semester and during these trips.

“I thought this chapel was very beautiful and really well done,” sophomore Lola Morrell said. “They provided the right tone for the conservation for a portion of human history that is often overlooked.”

“When they asked us to stand up, it showed how many people were affected or still are affected by these kinds of events,” sophomore Sofia Jorgenson said. “We need to think about how we act or what we say about this topic in the future.”

Students then took a tag with a number on it, to represent the Japanese families who were given a number and tagged during World War II and place it on a string surrounding the center of the gym.

“I was moved during the closing ritual when students and faculty were invited to name their connection to the Japanese-American internment, to Angel Island, and to other moments of systematic exclusion in recent history,” Campos said. “I did not realize how deeply woven our individual stories were to one another.”