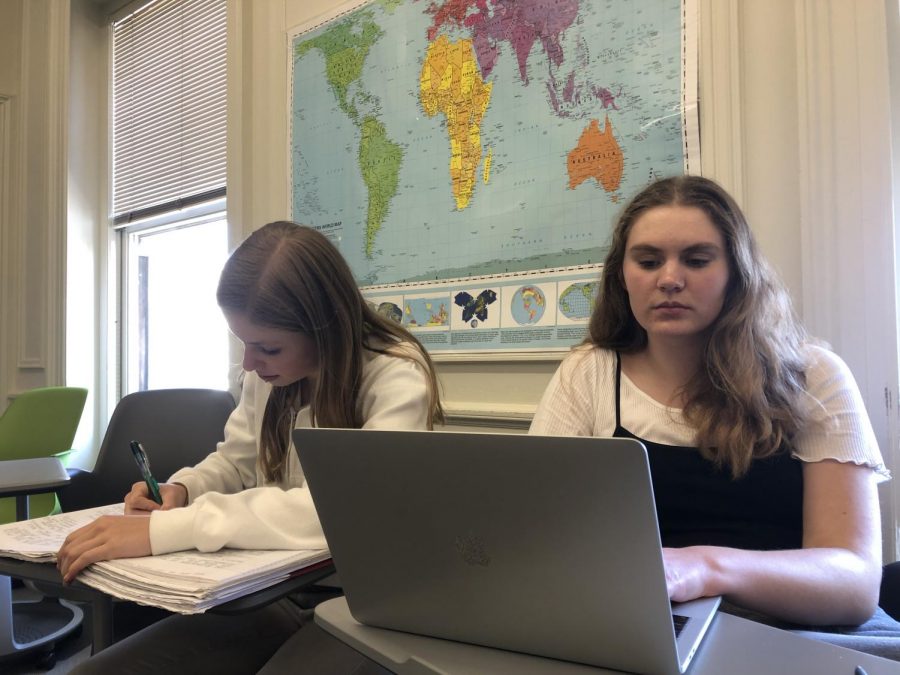 Sophomores Olivia Callander and Amy Phipps take notes during a final lecture on World War II. Students will have the opportunity to use these notes during an in-class writing assignment later this week.

Sophomores in Modern World History: Responses to Oppression completed their unit on World War II with a final lecture in class.

Students spent the last three weeks studying various topics including  World War I, World War II and the Great Depression as part of a unit on genocide.

“I had never gone deeply into learning about World War II,” sophomore Erandi Arciga-Duenas said. “I was excited to learn about this unit because these events are ones that continue to pop up whether in school or the media.”

Theory of Knowledge teacher Paul Pryor Lorentz began the unit with an ethical discussion aimed to help students visualize the immense number of lives lost during the Holocaust. While this lesson emphasized the emotional and ethical perspective of these events, history teacher Michael Stafford focused on the historical facts in his lectures.

“Any emotion that we  try to imagine is infinitely small compared to the emotions of the people who suffered the incredible oppression, violence and trauma of these events,” Stafford said. “That is why I try  to keep lectures as factual as possible.”

During the unit, students watched “Triumph of the Will,” a Nazi propaganda video in order to form a more holistic understanding of World War II.

“We watched the propaganda video to learn about the lengths people were willing to go to in order to spread their personal ideology,” Arciga-Duenas said. “It is important to expose ourselves to both sides of the war to understand where each side was coming from, despite what we personally believe.”

The unit will end with an in-class writing assignment  about World War II topics on May 9. Similar to previous in-class essays, students are allowed to use their class notes as a resource.