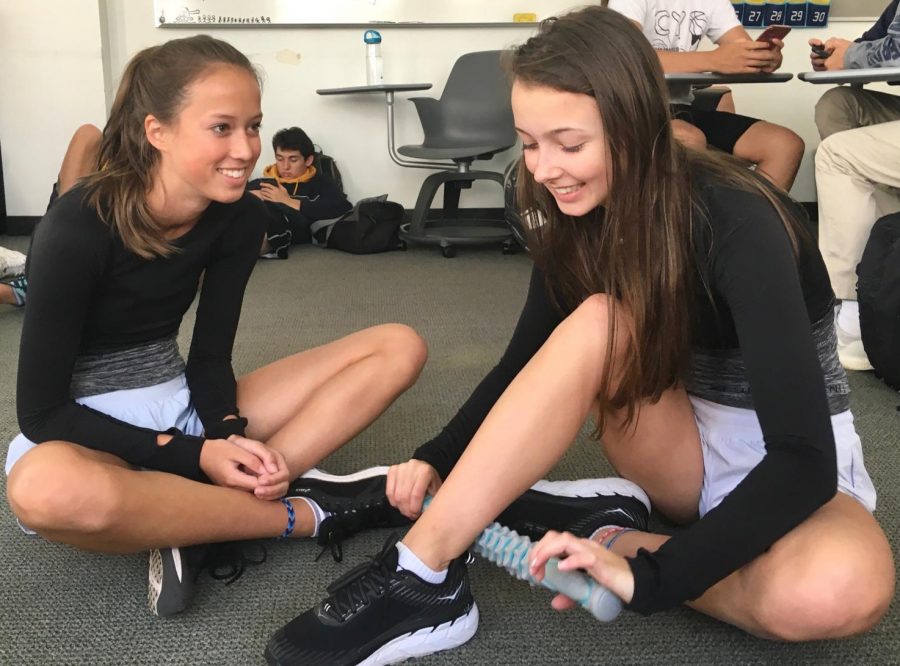 Freshman Amelia Abernethy and Madeline Thiara stretch and use the muscle roller stick before practice on Tuesday. Yesterday runners had twin day to celebrate track and field’s spirit week.

WEB EXCLUSIVE Track and field distance runners broke personal and school records during their third BCL West meet at Kezar Stadium in preparation for the Bay Area Conference this Friday.

“I love my group of girls who run distance,” junior Isabelle Thiara said. “It is a lot of fun because I train with people who share the same running interests as me.”

After playing soccer last year Thiara decided to return to the track and field team this season. At the last meet, she set a new Convent record of 2:27.53 minutes in the 800 meter and ran a personal record of 5:33.09 minutes in the 1600 meter making her the third fastest runner for that distance in the team’s history.

“I really wanted to share my love of running which has brought so much joy into my life through valuable relationships, friendships, connections, and experiences with the students here,” assistant track and field coach Alyson Barrett said. “I see so much potential and dedication from the runners to not only break school records but to also improve as athletes.”

Barrett has been an assistant coach of the track and field team since 2016. She ran competitively in junior high school through college and has since continued running in a competitive racing circuit.

“We have twice as many girls in the distance group this year, which really helps lift the overall team atmosphere,” sophomore Sofia Houts said. “People are more willing to push themselves when they have more teammates encouraging and supporting them.”

“Running helps people develop discipline, rigour and self-reflection which can be used in other areas of their life outside of track,” Barrett said. “In the races when you’re by yourself, it allows you to look inside and draw on the strength you have developed over the course of the whole season and showcase it.”

Competitions give runners an opportunity to do multiple events on the same day according to Barrett. They are able to race in various distance events, participate in jumps, throws, hurdles and relays.

“NCS is really competitive and I really want to put my best effort out there,” Thiara said. “We are going to have a large group of girls on this team coming out who have a lot of talent and I am really excited to see them grow as runners in the future.”