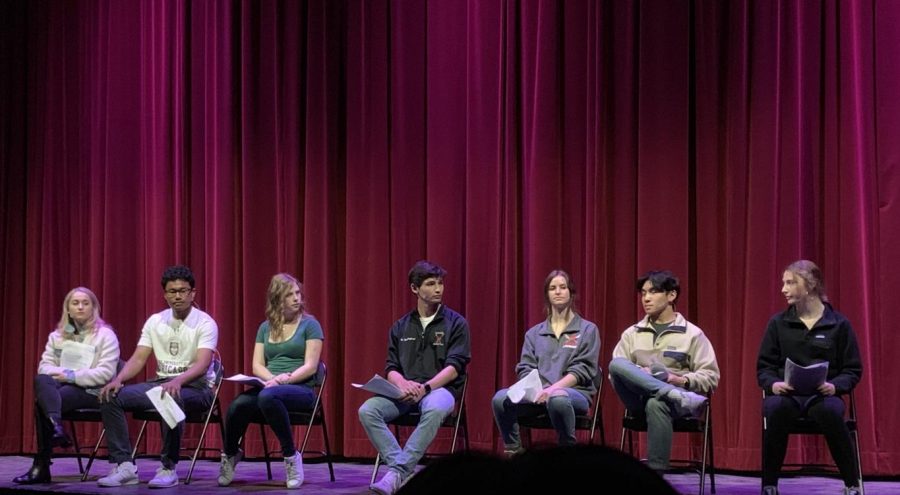 Performers introduce themselves at the end of the assembly. Each person told a different story from the points of view of various Bay Area teenagers.

WEB EXCLUSIVE Students organized and performed in a coed assembly centered around consent and healthy relationships.

“Consent and healthy relationships are topics that are vital to all of us, but particularly teenagers who are starting out in the world of relationships and exploring their sexuality,” Stuart Hall counselor Laurie Pomeranz, who was involved in putting on this assembly, said.

The seven students from all different grades told real-life stories of Bay Area teenagers who experienced pressure in relationships or sexual assault during high school. These stories were told from various points of views, including the perspectives of boys and girls who experienced these situations both indirectly and directly.

“I learned that this is a very universal issue that impacts a lot of people in many different demographics versus just one type of person,” freshman Mira Chawla said. “Unconsensual sex is very stigmatized so it is very important to learn about it.”

Pomeranz says that this is an issue that affects both individuals and the community so it is important to make sure students know they are supported when emotionally difficult circumstances such as sexual assault occur.

“I think it’s important to bring awareness to our community, especially with a topic that’s not easy to talk about,” Junior Kate Wing, one of the students who performed, said. “I think bringing this topic to the school in this format made it easier for people to take everything in.”