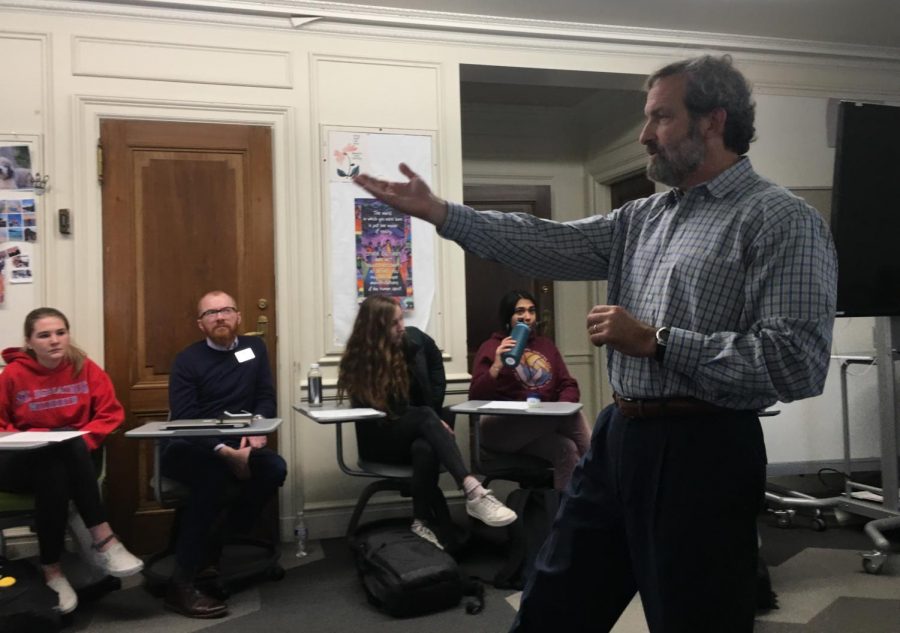 WEB EXCLUSIVE Author Marty Brounstein came into junior Theory of Knowledge classes over the past two days to discuss his book, “Two Among the Righteous Few: A Story of Courage in the Holocaust.”

“‘Two Among the Righteous Few’ is a true story of courage, compassion and rescue,” Brounstein said. “It’s the story of a young, married, Catholic couple named Frans and Mien Wijnakker who got involved during World War II and saved the lives of over two dozen Jews.”

Juniors in the Theory of Knowledge classes listened to portions of the audiobook and prepared questions and highlights on the book before Brounstein came to speak.

“I believe Mr. O’Connor read ‘Two Among The Righteous Few’ and saw Mr. Brounstein at a talk more than five years ago,” Theory of Knowledge teacher Paul Pryor Lorentz said. “Mr. O’Connor proposed the idea of using Mr. Brounstein’s story to explore knowledge questions within the Areas of Knowledge of History and Religious Knowledge Systems, as well as “faith” as a Way of Knowing.”

In addition to discussing the stories of the Wijnakkers and how they helped during the Holocaust, the classes talked about the moral choices the couple made and how those morals could be brought to everyday events, according to junior Lauren Tulley.

“He emphasized that instead of the golden rule of treating others how you want to be treated, that we should treat others how they want to be respected,” Tulley said. “I thought it was interesting to hear his perspective, especially because we didn’t listen to the full audiobook, so we could hear how the story fit together and the meaning behind the name of the title.”

The title of the book, which may seem self-explanatory, has a deeper meaning. The word “righteous” comes from an honor called “Righteous Among the Nations,” which was a title given to non-Jews who risked their own lives to try and save the lives of the Jews during the Holocaust, according to Brounstein.