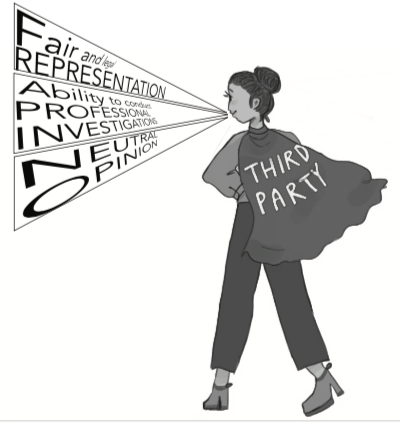 As victims of sexual harassment and assault come forward in the wake of the #MeToo movement, third-party organizations should be brought on to college campuses to help schools thoroughly and unbiasedly investigate each new case.

Almost two-thirds of college students reported that they had experienced sexual harassment on college campuses, according to the National Sexual Resource Violence Center. While colleges are required to regulate and prevent sexual harassment on campuses under Title IX of the 1972 Education Amendment, many universities mishandle the investigation process and do not carefully look into each case.

The Obama Administration sent out a “Dear Colleague” letter to United States universities in 2011 threatening to revoke federal funding if they did not strictly follow Title IX obligations.

Public colleges, though, are still able to get around these regulations as they do not have to publicize education records relating to sexual assault complaints under the Federal Education Rights and Privacy Act.

Three years after the “Dear Colleague” letter, students at Columbia University filed a complaint with the federal government claiming that the college had not properly investigated their sexual assault cases and had mistreated them.

Colleges rarely seriously punish sexual assault perpetrators. Fewer than one-third of students who commit sexual assaults on campus are expelled and only 29 to 68 percent are suspended, according to a U.S. Department of Justice study.

While college campuses often try to quickly cover up sexual assaults in order to maintain their reputations, minimize legal responsibilities and keep financial security, third-party organizations would be able to conduct professional investigations objectively and provide fair and legal representation for victims without ulterior motives of their own.

Third-parties need not replace colleges in these investigations, but the two should work in conjunction with each other. While third-parties run neutral investigates, college representatives would work with victims to schedule classes and room assignments far from their alleged perpetrators.

Already 20 percent of sexual assault victims fear repercussions for reporting harassment and 12 percent say their mistreatments are not important enough to report, according to the Rape, Abuse & Incest National Network.

Applicants should be aware of college policies before enrolling, and students already enrolled should demand just representation and thorough investigations. Colleges must, in turn, recognize their students’ wishes.

The implementation of an unbiased and equitable investigation system from third-party organizations would make victims more comfortable to speak up and receive the support and justice they deserve.