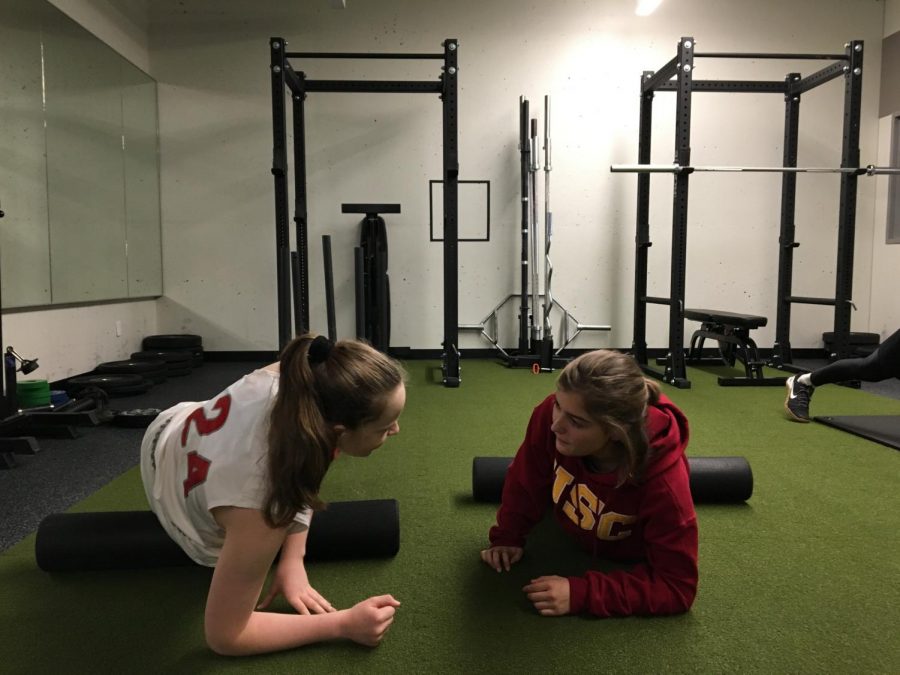 Sophomore Cecilia McQuaid and junior Sofia Telfer stretch in the weight room in the Herbert Center. The new mural will be painted on the back wall of this room.

The recently renovated weight room in the Herbert Center will welcome a new mural to its walls come second semester with a student-designed and executed painting of Convent & Stuart Hall athletes.

Lead by seniors Megan Mullins and Harris Rutherford, the project developed as an idea for their CAS project, a requirement for the International Baccalaureate Diploma Programme.

“We are going to put eight silhouettes of athletes on the wall in an athletic stance,” Mullins said. “We’re then going to write ‘Sacred SF Athletics’ across the mural with the school emblem using both schools’ colors.”

The project is almost completely student run, excluding a few suggestions from the athletic department, according to Athletic Director Elena DeSantis.

“I love that they’re taking the initiative and going forward with it,” DeSantis said. “They’re doing a great job asking questions and making sure they have everyone represented.”

Several athletes, including tennis player Mason Cooney, have been chosen by the student body to pose for the silhouettes through a voting form sent out by Mullins and Rutherford.

“I was completely surprised and honored when I found out I was chosen to be on the wall,” Cooney said. “It’s a great way to get our athletes represented and put a personal touch into the new workout room.”

In preparation for the painting of the mural, Mullins and Rutherford have planned the layout of the wall and communicated with the athletics department.

“We’re trying to include every sport, so we’ve been going to a lot of practices and games taking pictures,” Mullins said. “We talked a lot with Ren Marquette, Elena DeSantis and Barclay Spring about what we should have in the mural.”

Cooney says the addition of fans to the mural would help those who don’t participate in sports feel included as well.

“The mural is a great way to raise school spirit,” Cooney said. “If possible it would also be cool to get some pictures of fans cheering because they’re just as important to the sports program as the players.”

The mural team aims to begin painting the weight room over Christmas Break to avoid conflicting with sports practices.

“I hope the mural will allow the younger kids to look up to the high schoolers on the wall and see the athletes they can aspire to be,” Mullins said.