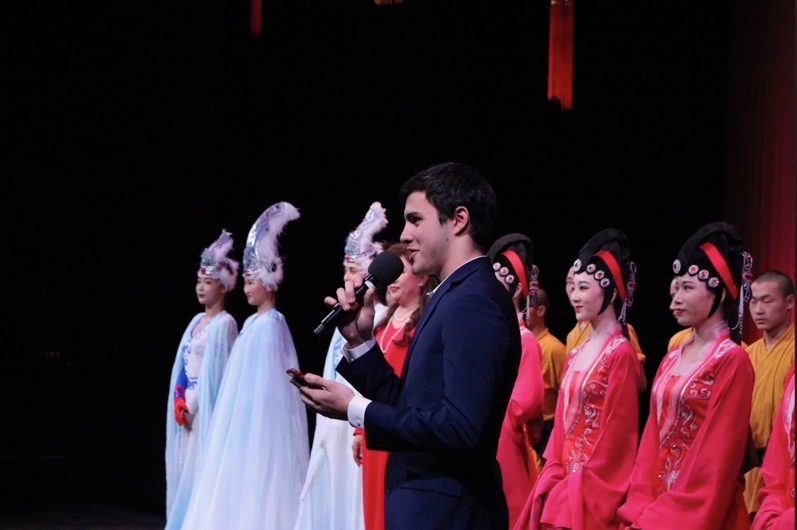 Junior Neo Kounalakis announces the dance group from the Chinese Consulate of San Francisco. The dance group visited campus during Collab to give a performance with dances relating to the Lunar New Year.

WEB EXCLUSIVE Students gathered in Syufy Theatre during Collab today to watch a dance group from the Chinese Consulate of San Francisco perform pieces relating to the Lunar New Year.

“We are extremely fortunate to have a good relationship with the Chinese consulate here in San Francisco,” junior Neo Kounalakis, who MC’d the event said. “This relationship has allowed us to host a Chinese dance group for the past three years free of charge.”

The group presented different cultural dances that included tumbling tricks such as flips and cartwheels meant to imitate certain animals. A woman from the group also performed two pieces on the Erhu, a Chinese instrument.

“I thought the assembly was a great way for everyone to come together and learn about a new culture,” freshman Roya Meykadeh said. “It was really interesting to see how the Lunar New Year is celebrated.”

In the middle of the presentation, senior Darius Ghorbani, sophomore Alexander Ellis, and Tony Farrell, Head of Stuart Hall High School, were chosen to come up to the stage and attempt the tricks that the dance group was doing.

“The reason for this assembly is to create a dialogue and a mutual understanding between our two distinct cultures and histories,” Kounalakis said. “It is important to have appreciation and understanding for different culture and art.”