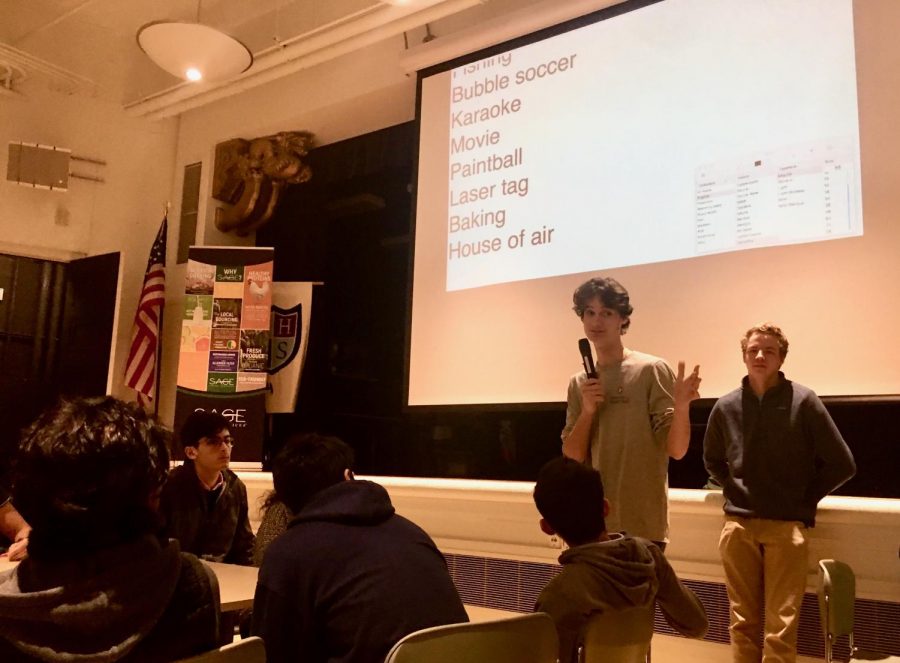 Stuart Hall junior Ryan Darwin asks the junior class for suggestions in planning a co-ed social event. Table groups came up with ideas such as going to House of Air or playing hide-and-seek at the Broadway campus.

WEB EXCLUSIVE Convent & Stuart Hall juniors met in the Columbus Room at the Pine & Octavia campus today for a class meeting which covered several topics including information about the upcoming junior retreat and planning a class social event.

The retreat, which has been a tradition in the junior class for many years, and has previously been held outdoors will now be moved to Cathedral of Saint Mary of the Assumption for an inward experience, according to Community Life Chair Paul Pryor Lorentz.

“I am working with the name ‘City Hearts’ for the retreat,” Pryor Lorentz said. “We’re in a city but there’s a way of being in the city we don’t always experience which is what we’re trying to achieve.”

The K to 12 community has traditionally celebrated Mass of the Holy Spirit at Saint Mary’s but did not do so this year as the Catholic fulfillment of the mass did not fall during school hours. The juniors will now have the opportunity to reflect in the space in a retreat form.

“I really enjoy the Mass of the Holy Spirit and have looked forward to it every year since I was in the Lower Form,” junior Caitie Rois Macken said. “It will be interesting to use the space for a different event than a mass.”

Junior class representatives are also now in the process of creating a social opportunity for the class to further the co-ed connection that began in Costa Rica as sophomores, according to Pryor Lorentz.

“The junior student council wanted to create an event that was meant for socializing and was student-run, not a reflection or retreat,” Pryor Lorentz said. “The representatives have been advocating for an event and they started collaborating with their classmates to try and make it happen today.”

At the end of the meeting time, junior representatives asked students to suggest ideas for the social event. The date of the social and activities have not yet been determined.

“Our group thought of a lot of things, from going to Six Flags to playing laser tag or having a field day,” Macken said. “I think no matter what we do it will be fun to bond with our class and I’m excited to hear more about the event.”