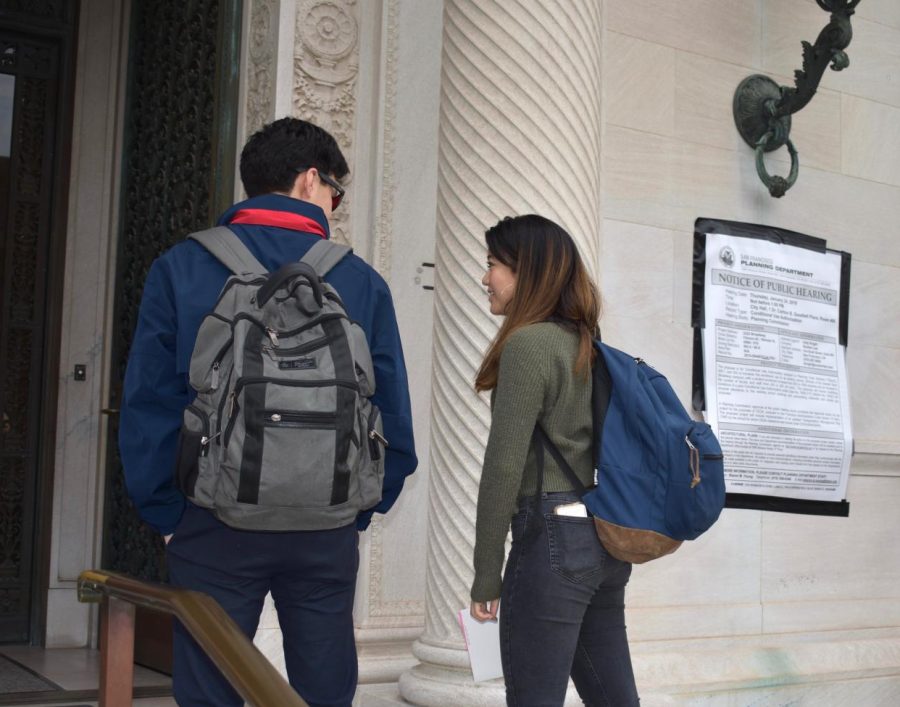 Sophomores Nina Sanchez and David Louie-Grover walk into the Flood Mansion, passing a notice of the upcoming public hearing on the school's application to increase student enrollment. The hearing was originally scheduled for Jan. 24 but has been postponed until April.

Convent & Stuart Hall is seeking approval from the City of San Francisco to change the Broadway Campus’ conditional use permit to increase enrolment by 200 students.

“Over the next few years we will look at our K to 12 program to see where it makes most sense to implement these additional students,” Strategic Design Facilitator Geoff De Santis said.

K to 12 grade sizes will not exceed 60 students, and individual classes in Grades Six through 12 will range between 12 to 17 students, according to President Anne Marie Krejcarek. Increasing enrollment will not require any construction.

“We have learned and experienced what we can do with the space we have,” Krejcarek said. “We are an entity that is quite diverse — culturally, ethnically, socioeconomically — and to have a little more capacity to increase that would be great.”

School representatives and legal counsel, as well as representatives from the Pacific Height Residents Association, neighbors and community members will have an opportunity to testify at a hearing on April 4.

“We want to be very intentional with who we are in the neighborhood and what our role is,” Krejcarek said. “We also want to live fully into our capacity to increase the quality of the experience in the classroom.”

Krejcarek said the increased enrollment will most greatly affect the Middle Form which currently has limited spacing and depends on a student leaving to open a space.

“It is not always easy for us or for families to make a decision in kindergarten about whether or not we are the right school choice,” Krejcarek said. “By Middle Form, we can better see whether a student and a family are a match, and they can have a little more discernment on whether we are a match.”

The Broadway Campus has not increased enrollment since 1984. The City of San Francisco approved an increase of 40 students for Stuart Hall High School on the Pine-Octavia Campus last year, according to De Santis.

“Since 1984 we have built two more properties — the Siboni building and Herbert Center — so it was time for us to see if we can increase our number of students,” De Santis said. “Part of the application process was to have our campus analyzed to see if the buildings can handle those extra bodies, and all those reports have come back positive.”

“The impact on traffic is going to be very minimal,” De Santis said. “As long as our internal community is respectful of our external community and follows our traffic procedures, there should not be any impact at all.”

The Pacific Heights Residents Association has expressed concern that additional students may lead to increased traffic issues and lack of parking availability during the hours directly before and after school, according to President Terry McGuire.

The hearing originally scheduled for Jan. 24 was postponed until early April to give time for the PHRA board to meet with De Santis and Krejcarek on Feb. 4 and exchange information.

The association has not yet taken a final position on increased enrollment, according to McGuire.

The school plans to continue working with the neighborhood to sort through any concerns before the hearing, according to Krejcarek.