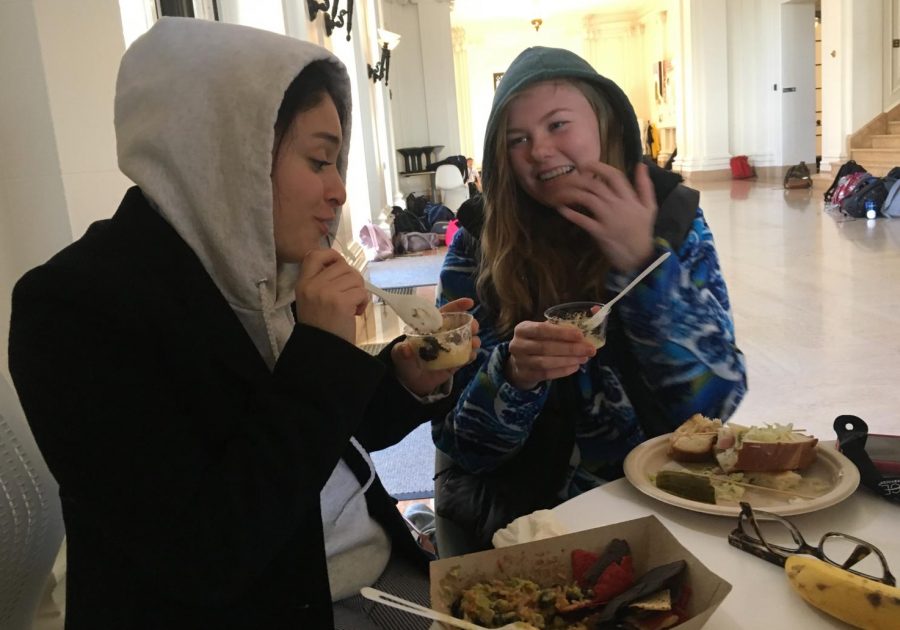 Seniors Isabella Bermejo and Molly Brown eat lunch in the main hall while wearing multiple layers. Temperatures in San Francisco averaged around low 40s this week and even lead to snow on high peaks around the Bay Area.

WEB EXCLUSIVE With temperatures averaging low 40s this week, students are cranking up the heat at home and bundling up during classes and extracurriculars in parkas, trench coats, beanies and gloves.

“I’ve had to wear more layers than usual this week because San Francisco doesn’t usually have this type of weather,” senior Molly Brown said. “I’ve come to school wearing multiple sweatshirts all at once this week.”

For students who participate in sports outside of a heated facility, such as senior and rower Camilla Sigmund, the cold weather requires an adjustment of practice procedures.

“When you’re playing sports in the cold you have to make sure that you have a longer warm up so your muscles don’t tense up too much,” Sigmund said. “I usually do a 10 minute warm-up at practice but this week I’ve stretched it to 20 just to make sure my body is ready to do sprints.”

Although the Bay Area never sees snow on a scale as large as the Midwest and East Coast, over the past few days there have been lookouts for snowfall on high peaks near San Francisco, according to Brown.

“I saw weather reports the other day about possible snow in San Rafael and there was a 50% chance of snow in the middle of the night,” Brown said. “There’s also been sightings of snow on top of Mount Tam and a few places down in the South Bay too.”

For most of the student body, the cold weather is fleeting, however for some seniors venturing to college in colder locations, the weather has given them a taste of what they might be living in next year.

“The cold weather has made me more aware that I not only need more jackets and long socks, but also that this might be what it’s like to adapt to a new climate in college,” Sigmund said.