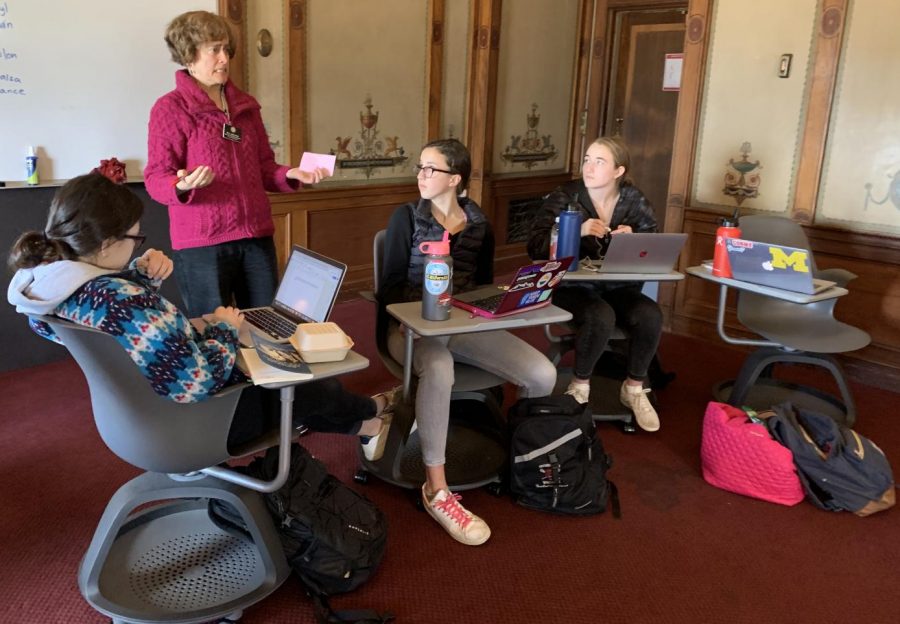 Arce explains an in-class writing assignment with a prompt based on the drama to the class. The final draft will be due next week.

“I think what makes it interesting is the fact that Oedipus is a tragic hero,” junior Miley Sherman said. “His search for the truth is both his best and worst quality.  It is really admirable and respectable how much he wants to find the truth but at the same time it leads to his demise.”

Last week the class split into groups and engaged in Interactive Oral Commentaries, in which each group studied a specific focus of Ancient Greek culture, for example, Greek Gods or Sigmund Freud’s Oedipus complex. Students would then reflect on how these subtopics deepened their understanding of the drama.

“The IB asks us to read books from cultures that are not our own and cultures that may have influenced our own,” English teacher Julia Arce said. “We have a lot of Greek influence in the West and because Sophocles was a foundational work for all subsequent drama he is a good person to start with.”

The various themes and symbols throughout the drama add to its complexity according to junior Kai Johnson.

“Something I find really intriguing is the symbols that are in the book, such as feet and eyes,” Johnson said. “Oedipus’ name in Greek translates to feet and Sophocles always refers back to that in the play. This repetition really highlights a lot of different perspectives about Greek culture and hierarchy.”

The drama also brought up ideas about fate and destiny according to Arce.

“[King Oedipus] is not necessarily the most uplifting story, but if you look at it on a symbolic level then it is more than just something disturbing,” Arce said. “It brings  up big questions about a human’s ability to make their own decisions in response to fate or the courses of the universe.”