Students and faculty start the new year with chapel 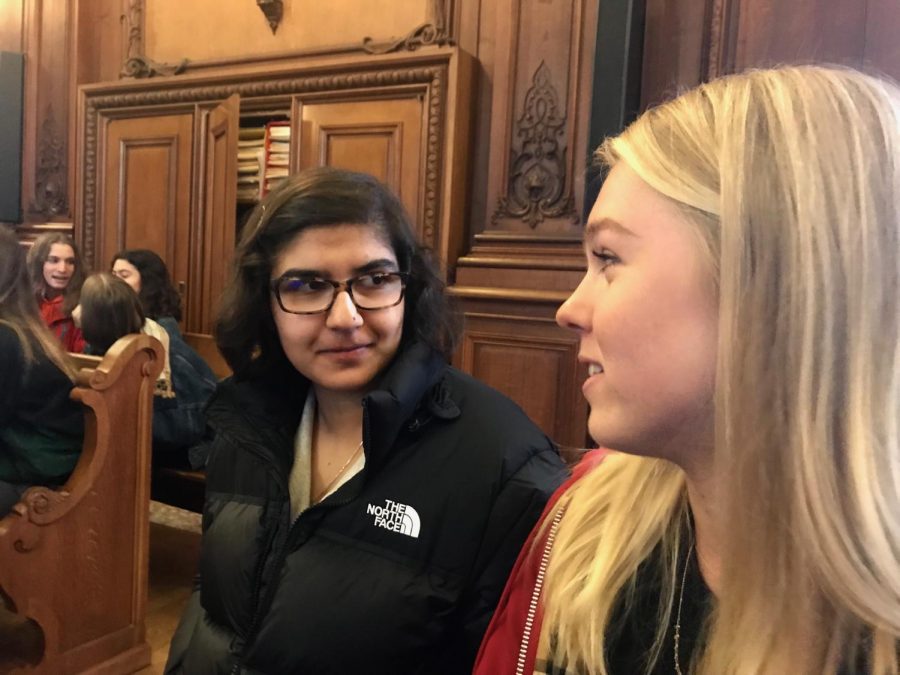 Juniors Arianna Nassiri and Phoebe Froeb discuss with one another in chapel during an activity. Students and faculty shared who they spent their break with and how that person impacted them.

WEB EXCLUSIVE Convent kicked off the new year with chapel to recenter and calm students and faculty for the start of the second semester.

Chapel was led by Head of School Rachel Simpson and Chair of Community Life Paul Pryor Lorentz. Student and faculty began with a musical Espacio —listening to In the Bleak Midwinter —and taking time to take breaths and meditate.

“Chapel brought me back from break and into school mindset.” freshman Lauren Thompson said. “The song played during Espacio was very relaxing and a good opportunity to take a breath and reminded myself to destress.”

Simpson welcomed everyone back from break by reminding students not to stress about grades which are being published in the next few days and instead to begin setting goals for the new semester. First semester grades were not released over Christmas break because faculty believed that students should take time to themselves rather than stress over grades.

“It was super relaxing and a nice way to reflect on the year and the past year,” junior Phoebe Froeb. “It felt good to talk about the goals we will set for ourselves in the future.”

Chapel also included Bible readings about Epiphany which is a Christian holiday that celebrates the revelation of God incarnate as Jesus Christ and saying of a travel prayer for sophomores embarking on their Costa Rica trip next week and students traveling to Mexico on a service trip.

“The chapel today was a really heartwarming and calming experience,” junior Margaret Millar said. “It really brought forth the feeling of community.”