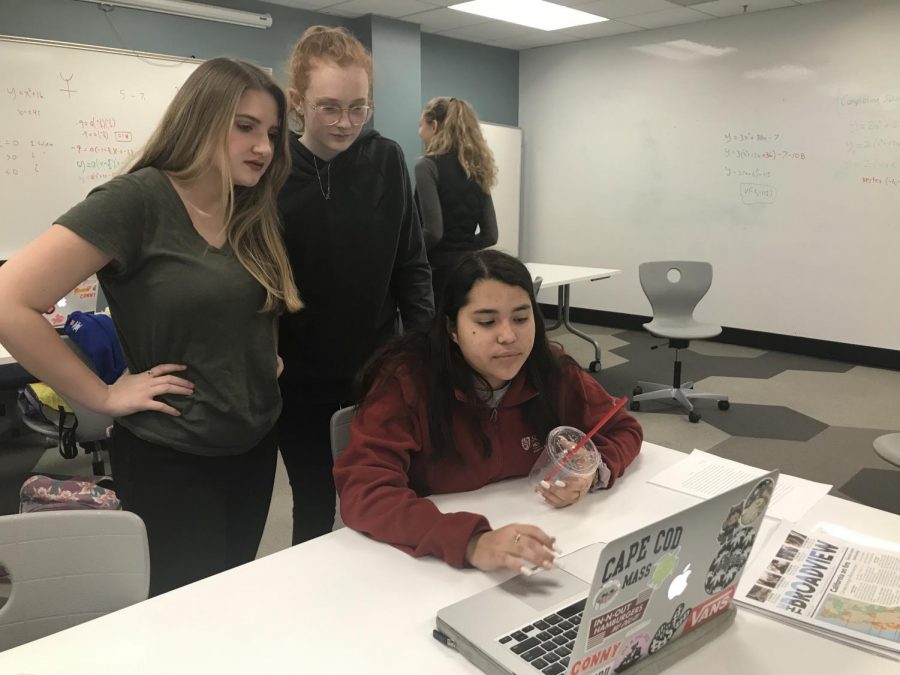 Juniors Margaret Millar, Zoë Forbes and Julianna Ovalle crowd over a computer to see the news about the bomb threats. Students in HL Global Politics discussed the issues in class.

“My initial reaction was shocked because I was wondering what’s going on, because obviously if they sent out a school-wide email and there’s lots of police all over the area you want to know what’s going on,” junior Julianna Ovalle said. “Then I hopped on CNN and
to see what was happening and the whole class kind of stopped and we all talked about it.”

According to NBC Bay Area, there was a bomb threat at the San Francisco Fire Credit Union that turned out to be a hoax.

“I don’t know that students need to take huge cautions, but we have to take things like this seriously to keep people safe,” history teacher Michael Stafford said. “It is unlikely that someone could have placed bombs in all the places that person said they placed bombs but you never know so you want to be serious.”

In the email, Buckley advised students to take precaution and to only travel between the Broadway campus and Pine/Octavia campus on the school shuttles.

“I don’t think it makes a difference if we’re taking the shuttle in between the two campuses because we’re still going through that area,” junior Margaret Millar said. “There was a lot of trouble coming into the city this morning because there was a lot of traffic on the bridge and I’m wondering if that’s because of the bomb threat.”

“One of the topics that my HL Global Politics students are talking about is security and what the role of government is in terms of helping to provide security such as law enforcement — from local police to FBI,” Stafford said. “How we employ technology to locate people who are committing crimes is that same idea that we have people who are part of our government who are  employed to locate criminals and to keep us safe.”