Phone app can cause user obsession 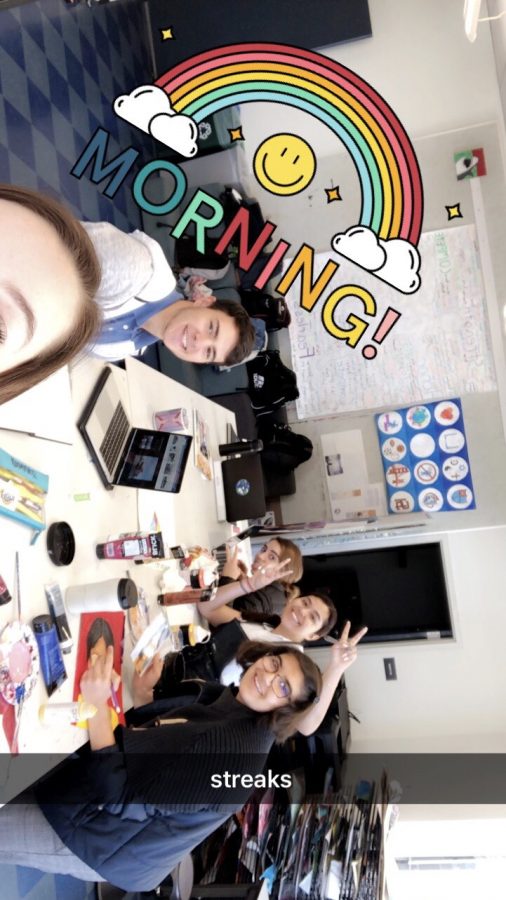 SNAP IT Juniors pose for a Snapchat photo between class. The app encourages users to send daily photos to multiple friends.

Freshman Kelly Cronan sends a photo to 120 of her Snapchat friends everyday. Sometimes it’s a photo of herself, what she is doing or who she is with, but the photo always has the same typed or hand-drawn caption with an “s” or the word “streaks.”

Snapchat streaks — indicated by a number next to a friend’s name that represents the days the sender and recipient have snapped a picture back and forth without fail — were created for users to communicate easily with friends, according to Snapchat Inc.

“Streaks are a way to remind yourself to talk to people you usually don’t talk to and to just talk to your friends every day,” Cronan said. “I like Snapchat streaks because they are a fun way to communicate and are a great way to get to know people in my grade better.”

While Cronan is an avid snapper, some students such as junior Lauren Tulley have stopped sending snaps and using the app entirely because of the time commitment retaining streaks demands.

“A lot of my friends had Snapchat, so I was encouraged to use it,” Tulley said. “I stopped using Snapchat and sending streaks. I was spending an hour and a half a day when I could have used that time in more productive ways such as schoolwork or hanging out with people in person.”

Cronan says she enjoys streaks, but also says that a drawback to them is the addicting feature of needing to “snap” back and forth instantly.

“I find myself on Snapchat more just because of streaks,” Cronan said. “Once I send them out, people respond to them and then I respond. Before I’ve realized it, I’ve been on my phone longer then I anticipated.”

Sophomore Hallie Williams used Snapchat daily but sends pictures individually to friends instead of sending out one mass picture with the traditional streaks remark.

“I respond to people’s snaps, but I don’t send streaks daily like a lot of people do,” Williams said. “When I sent streaks frequently, I didn’t like the obligation I felt to keep every streak going.”

Although the app allows for frequent contact between users, the gamification of Snapchat has led many students to rely on it as the only way of communication between individuals, raising concern Tulley.

“Streaks can be good if you do not see someone often and want to keep in touch with them, but many [of my friends] are at school so streaks seem like a waste of time to me,” Tulley said. “I think streaks were really popular for a while, but now they are declining a bit because people are realizing that it is more valuable to spend time with people in person, face-to-face.”