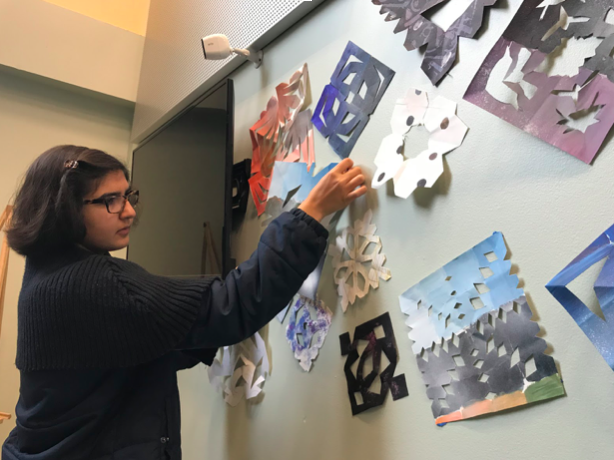 Junior Arianna Nassiri tapes snowflakes on the wall outside of the Syufy Theater for the art show. The exhibit will open on Dec. 12.

“Within IB Year I, we start off the class exploring identity,” Visual Arts Department Chair Rachel McIntire said. “The project is part of what is called ‘Three Sides of Self,’ where they  look at the different aspects of their personal identity.”

Students were asked to choose three different mediums to work with such as traditional calligraphy, digital art, mixed media, traditional drawing and embroidery according to McIntire.

Junior Julianna Ovalle is working on two pieces, one featuring her mother and the other a self-portrait. Students have been working on their projects for the entire semester.

“This is an opportunity to show parents, friends and people in our community what we have been working on so far this year,” Ovalle said.

Students in IB Music Year II will also perform a concert after the exhibit.

“I am opening for the concert,” senior Sydney Caba said. “It is always fun to perform in front of new people.”

“This is the first time my art has been showcased,” Ovalle said. “I am really excited to see everyone’s work go up.”