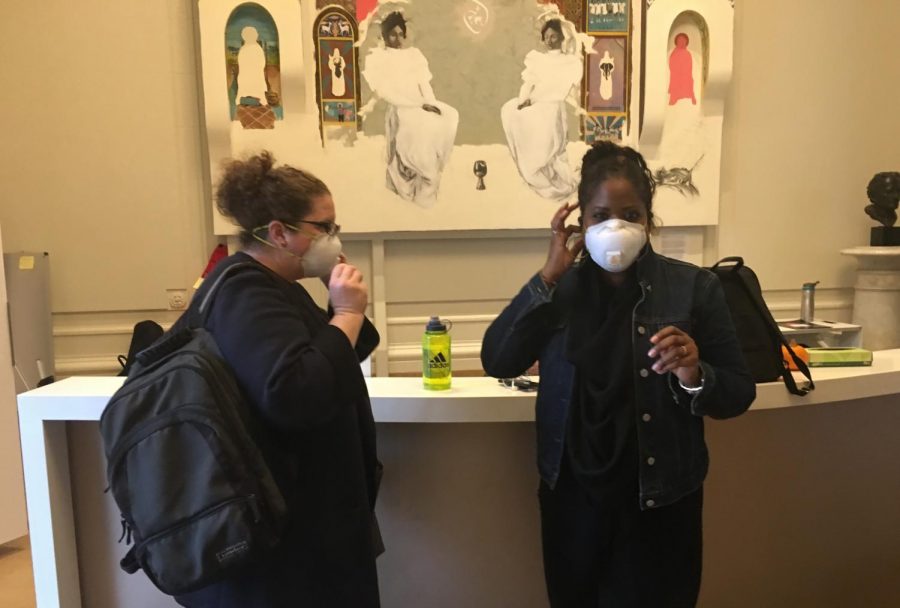 Grade chair Allyson Maebert puts on a mask in the Main Hall before going outside of the Flood Mansion. Many students and faculty chose to wear masks to prevent inhaling smoke particles.

WEB EXCLUSIVE Due to the unhealthy air quality index in the Bay Area caused by smoke from the Camp Fire in Butte County, winter sports teams have had improvised workouts this week, and school will not be in session tomorrow.

The Camp Fire, which began at 6:30 a.m. on Nov. 8 on Camp Creek Road in Butte County, is now 40 percent contained, according to Cal Fire. San Francisco had an air quality index of 240 as of this afternoon, classified as very unhealthy, according to AIRNow, which discourages all prolonged exertion in the very unhealthy air.

“We should not be running around outside because of the bad air quality,” varsity soccer player Amelia Estes said. “So instead we did an inside workout with Barclay on Monday, which was kind of hard to do on the mezzanine, but was a good workout.”

Players are worried that the lack of traditional practice may affect their training for games, according to Estes.

“It is beneficial that we do indoor workouts targeted for soccer players,” Estes said, “but at the same time, [the air quality] will affect us because we are losing a lot of playing time to prepare for games.”

While many winter sports teams crammed into the Herbert Center, the cross-country team found a different way to get out of the smoke-filled air and continue their practices as they wrap up their season.

“The cross-country team went to the Embarcadero YMCA for one of our practices this week,” team member Isabelle Thiara said. “Since we could not run outside, we utilized the materials the YMCA had inside, like treadmills, to still get an intense workout in despite the air quality.”

Rehearsals for the fall play, “Metamorphoses,” have not been altered and opening night proceeded as planned at 7 p.m. Friday.

“We have been working really hard on the play, so I am glad it is not canceled,” junior Margaret Millar said. “The air quality has affected our vocal projection, which is important because we cannot have microphones for this production.”

Convent & Stuart Hall President Ann Marie Krejcarek wrote in an email that school will not be in session tomorrow.

California Governor’s Office of Emergency Services and the California Department of Public Health recommend that everyone wear N95 respirator masks to protect lungs from wildfire smoke when outside. Masks must fit securely around the face to ensure efficiency.