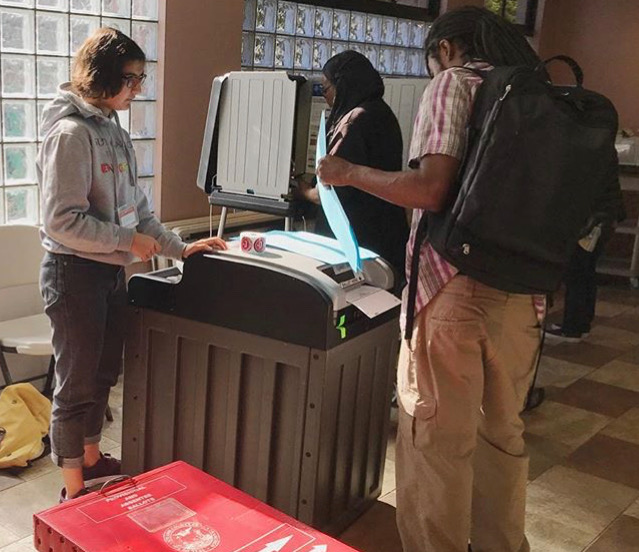 Junior Arianna Nassiri volunteers at the polls for the 2018 Midterm Election. Volunteers were asked to help voters obtain and submit their ballots.

“I decided to be a poll worker because I turned 18 four days before the election and I had never been politically active before,” senior Sophie Mack, who voted for the first time and volunteered at City Hall, said. “I wanted to do something to help other people vote because I was finally legal to vote myself.”

Volunteers set up machines and booths and assisted voters with obtaining and submitting ballots, according to junior Arianna Nassiri.

“I decided to volunteer as a clerk in this election because I wanted to demonstrate to myself and others that minors can still play a critical role in our nation’s democratic process,” Nassiri said. “I believe that younger powers in government bring legislative bodies closer to an accurate representation of its constituents.”

Mack is one of the many seniors who voted for the first time.

“It took me about a half an hour to vote because I had to research all the candidates for each position and what each proposition meant,” Mack said. “I felt a lot of pressure to make sure that I knew everything I was voting for because I did not want to make the wrong decision.”

Voters ages 18-29 typically vote less than older generations, but in the country’s current political climate it is important for young people to use their voices in this election, according to history teacher Michael Stafford.

“Democracy is about people power and if people do not exercise their power, then there is no point in having a democracy,” Stafford said. “The more people who show up to vote, no matter how old or what race, ethnicity, religion, gender or political party, the stronger our democracy is.”