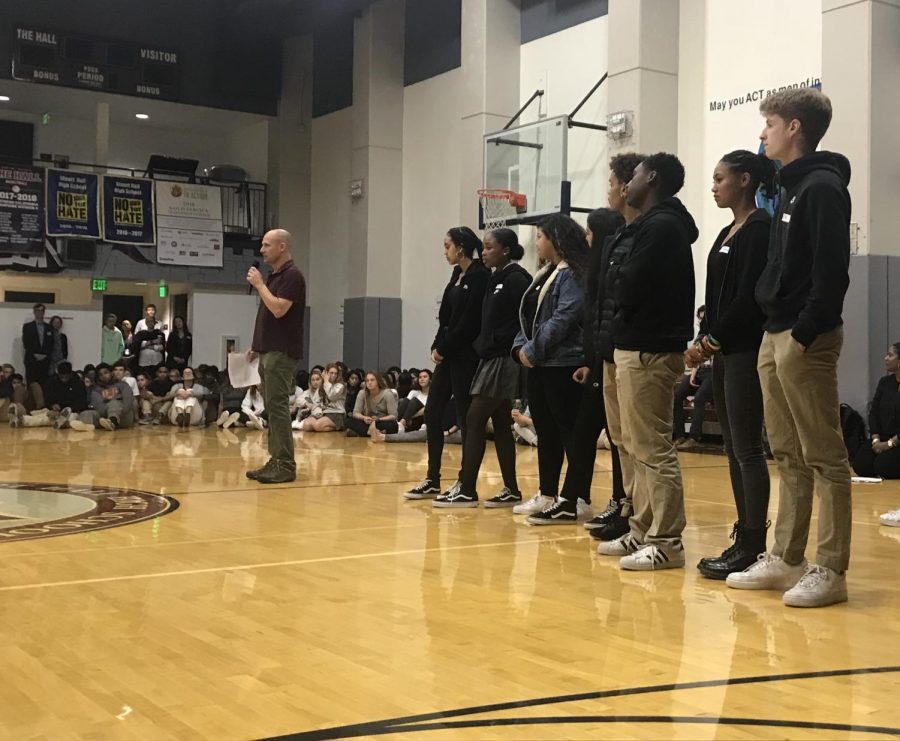 Members of POCSU line up in the Stuart Hall gym to present personal stories. Guest speaker Ted Saltveit mediated the conversation and asked students questions about their experiences with race.

WEB EXCLUSIVE The People of Color Student Union hosted a Convent & Stuart Hall assembly around the theme “Raising Our Voices, Claiming Who We Are” to discuss issues surrounding race.

The assembly began with an Espacio lead by POCSU members who were dressed in black and linking arms in a circle to demonstrate unity.

POCSU co-leaders Cervantes and senior Trevor Blanc lead the assembly. Members of the club also shared personal stories about times they encountered an offensive or uncomfortable situation because of their race or ethnicity.

“People should feel like they have the power to say if they feel offended or do not like a racial statement,” Cervantes said. “Our experiences are not stupid and they are not invalid, we just want them to be understood.”

Ninth grade chair Allyson Maebert and theology teacher Michael Campos facilitated the assembly while other faculty and staff also lead parts of an interactive activity. During the activity, students and faculty were asked to take a step forward if they had ever experienced an issue pertaining to race, gender, socioeconomic status or specific family dynamics.

“It was interesting because there was a question about have you ever participated in a racial or ethnic joke that would be considered offensive and a lot of folks stood up,” history teacher Michael Stafford said.“Sometimes we have to be a little uncomfortable to be able to get at the realities and I thought that was a powerful experience.”

Guest speaker Ted Saltveit ended the assembly by speaking about being a white ally and teaching people how to be supportive and educated on culture and race.

“I am always continually impressed by the strength and poise of the young men and women at our school who put together these assemblies,” Stafford said. “They showed their willingness to engage in a really tough topic and were creative and brave at the same time.”