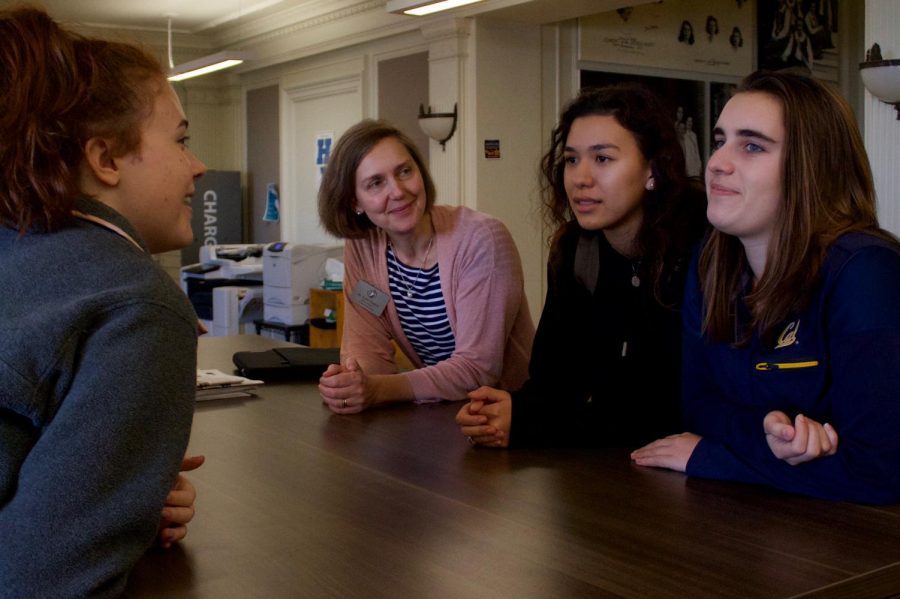 LEAN IN Head of School Rachel Simpson converses with seniors Laura Mogannam, Kate Etter and Day El-Watter outside her office in The Gallery after school. Simpson is being recognized nationally for encouraging students to express themselves across all academic areas including written word, student government, art shows and student-initiated events.

Head of School Rachel Simpson will accept the Journalism Education Association Administrator of the Year Award on Saturday at the JEA/NSPA National High School Journalism Convention in Chicago in recognition of her support of journalism education and student press freedom.

The award annually commends an administrator for supporting students’ press rights and includes $1000 for the school’s journalism program.

“I am still a bit positively shell-shocked,” Simpson said. “To know you are being nominated is one thing, it is a very nice honor, but to actually be selected is amazing.”

“Ms. Simpson’s continuous support helps to sustain the amazing quality of The Broadview and enables us to create the best publication possible,” Rozzelle said. “No matter what is going on, she understands the importance of what we do and never puts us in the back seat.”

Simpson’s approach to student expression is unique for private schools in that she does not restrict topics the staff can report on, according to Rozzelle. California public schools students are guaranteed the right to determine content of their publications under Education Code 48907, but this right is not extended to private school students who often must consult administration before publishing some stories.

“We look for an administrator who is willing to uphold student’s First Amendment rights, support students who tackle controversial stories and stand by them and the quality of journalism that they produce,” JEA Awards Chair Karen Slusher said. “The Administrator of the Year Award goes to show just how important a high-quality administrator is for the success of a publication or for a student media program.”

Sena says she decided to nominate Simpson this year because of her continuous support for The Broadview and encouragement for the staff to share their well-articulated opinions.

“Our job as educators is to give students the scaffolding they need to make wise decisions,” Sena said. “Ms. Simpson believes in doing that, and then giving students latitude to figure things out on their own. She values students speaking up for what they believe in, and sees that as an important part of the educational process.”

Simpson says her outlook on press freedom is rooted in the Goals and Criteria of  Sacred Heart education, specifically Goal Three, which focuses on social awareness, and Goal Five, which states students are educated to personal growth in an atmosphere of wise freedom.

“I believe students have the capacity to recognize that wise freedom should always be balanced by responsible and ethical decision making,” Simpson said. “Students recognizing that they have a voice and something important to say is at the heart of why we educate them.”

JEA has asked Simpson to give a short speech at the award ceremony. She says she plans to speak about her views on press freedom and address the mission of Sacred Heart schools.

“While this is definitely an honor on a personal and individual level,” Simpson said, “I do feel that I am receiving this award on behalf of the school and all of the faculty and students.”