Educators forced to commute due to expensive SF housing. 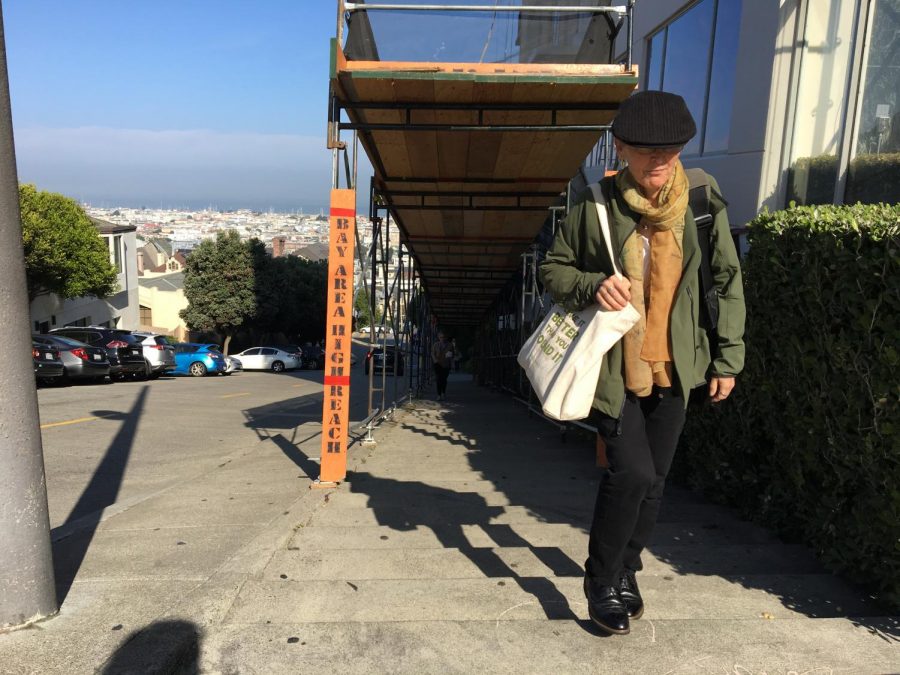 TRIP'S END Theology teacher Kate McMichael walk up the Fillmore Street hill as part of her daily trip to school from her home in Fairfax. McMichael spends up to three hours commuting each day.

Rising as early as 4:10 in the morning, theology teacher Kate McMichael begins her school day with a quick exercise session before catching a 6:30 bus into San Francisco for her hour and fifteen-minute commute.

McMichael travels from Fairfax, in Marin County, as one of the many teachers who live outside the City due to unaffordable housing prices.

“When my father-in-law died, his medical paperwork took over the one-bedroom apartment we were living in,” McMichael said. “We could not afford another apartment in San Francisco, but we were fortunate enough to put a downpayment on a house 20 miles away. Our mortgage payment was actually less than rent in the City would have been.”

McMichael says she can spend a total of two or three hours commuting each day, on the bus and walking up eight blocks from the bus stop to the Broadway campus.

“My watch tells me every morning that I have not gotten enough sleep,” McMichael said. “I try to make it to [sports] games and drama shows, but it is hard. I cannot always stay for all of something, or I just get home really late.”

English teacher Julia Arce also commutes from outside the City, and says her drive home across the Bay Bridge to Oakland can take up to two hours.

“A lot of my energy is spent in my car,” Arce said. “I have often wanted to live closer to school for my own health and for environmental health, but it is cost prohibitive for me.”

Rent in San Francisco is the highest in the world, according to a 2018 Walletwyse study that compared average rents between 540 cities worldwide, at an average of $3,570 a month for a one bedroom apartment, according to Zumper.

“If I could make it work and afford [living in] the City, I think I could enjoy being able to walk and take public transportation to school,” Arce said. “I would ultimately get more rest and have a little more creative energy to put into my work.”

Arce and McMichael are not the only ones dealing with unaffordable housing — the average teacher in San Francisco can only afford 0.7 percent of homes on the market, according to a 2018 Trulia study.

Former California State Sen. Mark Leno authored a bill in 2016 to address the problem, which authorized school districts to lease property for affordable housing projects. Under the bill, signed by Gov. Jerry Brown, then-mayor Ed Lee allocated $44 million toward building a new housing complex in the Sunset District for teachers and paraprofessionals, such as teacher aides.

“Teachers are in a profession that does not get paid nearly enough, and consequently they have such a difficult time finding housing in San Francisco,” Corey Smith, Deputy Director of the San Francisco Housing Action Coalition, said. “We have always been super supportive of different initiatives to find more teacher housing.”

The SF Housing Action Coalition, a non-profit organization that advocates for the pro-housing agenda in the Bay Area, supported Leno’s legislation, according to Smith. The organization endorses and grades housing projects based on eight criteria, from architecture to affordability, to be turned into the San Francisco Planning Commision and the Board of Supervisors.

“As it goes through the entitlement permitting process, they basically have our letter of support,” Smith said. “Elected leaders and appointed officials in the City know who we are and that we pay attention to these kinds of details when it comes to individual housing projects.”

The organization also informs residents about local housing projects and encourages them to express their support to the supervisor, according to Smith.

Both McMichael and Arce say they support any steps being taken towards building more affordable housing, but also emphasized the need for more low-income housing in San Francisco.

“It is so hard for us to see beyond our own personal needs, and maybe we need to let go a little of what we want in order for more people to have access to something — whether that is homelessness, housing for teachers or low-income housing,” McMichael said. “It is such a huge issue, and we talk about it more than I think we actually address it.”

Arce, who has worked at Convent for 19 years, said the commute has gotten worse since she started working at the school. Both Arce and McMichael said that working at Convent is worth the extended time commitment.

“I love my students enough to keep showing up even if it is three hours on the road everyday,” McMichael said.