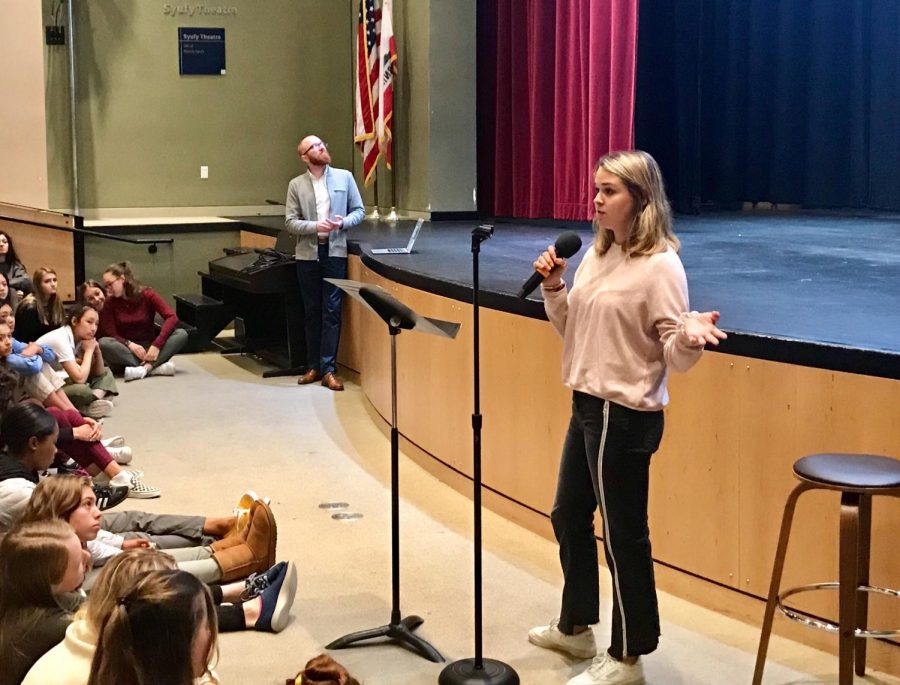 Senior Rachel Cramer presents her club, Social Media Awareness, to educate students on the impacts and utilization of social media. The club plans to meet every other Wednesday at lunch.

WEB EXCLUSIVE Students presented 20 out of 37 total clubs within Convent & Stuart Hall today, both single-sex and coed, during an assembly in Syufy Theatre.

“I have noticed that the clubs that have the greatest level of consistency have the greatest impact,” Co-chair of Community Life Paul Pryor Lorentz said. “Clubs that show how interested people are or how consistent the leadership is, provides that space for students to feel a part of something and I think that inspires good work and good commitment.”

All clubs are student-run and created. Junior and first-time club leader Margaret Millar created a new club focused on marine conservation. Millar plans to include beach cleanups, hikes, and conversations about dying environments such as coral reefs in her club.

“I have loads of ideas for what to do with my club and I also got a lot of good feedback,” Millar said. “I am very excited because marine conservation is something that I am very passionate about and I am planning on taking care of the ocean, spark conversations about how to improve things such as overfishing and really raise awareness about what humans are doing to the ocean.”

After students presented their clubs, students went to their Paws Advisory to discuss which clubs they would like to participate in as well as confirming that they had the time to commit to the clubs they want to join.

“I was interested in the Service to the Homeless Club and I want to join that club because I am trying to volunteer at St. Vincent’s in San Rafael,” junior Isabella Parmenter said. “I am also the president of the debate club so I have to balance leading a club and wanting to participate in clubs I enjoy.”

In the past, many clubs have started out strong but have been unable to maintain consistency or organization due to students’ schedules building up throughout the school year according to Pryor Lorentz.

“Halfway through the year, we will get a more solid sense of each club,” Lorentz said. “We are going to continue working on formalizing the club process and eventually we will do a survey and see how involved people are in the clubs that have been listed.”