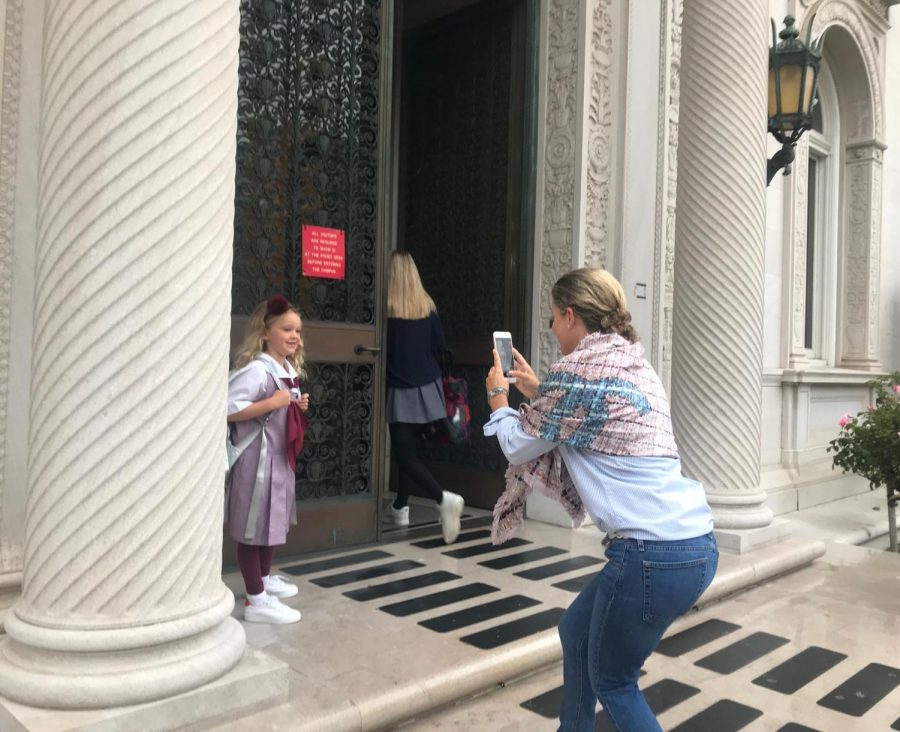 Mother takes a photo of her daughter on the first day of school. Grades K to 12 began school today at 8 am.

“I love having the elementary back,” senior Poppy Cohen said. “If I’m stressed, seeing them smiling and happy always manages to brighten my day.”

Students, however, also stated that the start of school for the elementary students caused extra traffic in the morning. Many parents and elementary students gathered around the Flood Mansion to take photos, causing some high school students to arrive late to class, according to senior Molly Brown.

“The drop off at school was very hectic because every parent was either dropping off their kid or trying to walk them in,” Brown said. “It was a lot quieter on Monday, but it is nice to have the kids back because our Convent & Stuart Hall community now feels complete and it feels like school has really started now.”

While the return of the lower and middle form students affected space and promptness, their return adds to the Convent community, according to physics teacher Riaz Abdulla.

“I love having them back,” Abdulla said. “When they are on campus and occasionally peep into the classrooms, they see that we are doing some cool stuff here and I think it is great for them to see what we are up to, it just adds good energy.”

The four divisions serve as a reminder of the greater Sacred Heart community each student is a part of, according to Cohen.

“Having the little kids back is a humbling reminder that the community is much bigger than just you and your grade and it will continue to be so long after you’re gone,” Cohen said. “It really puts things in perspective.”