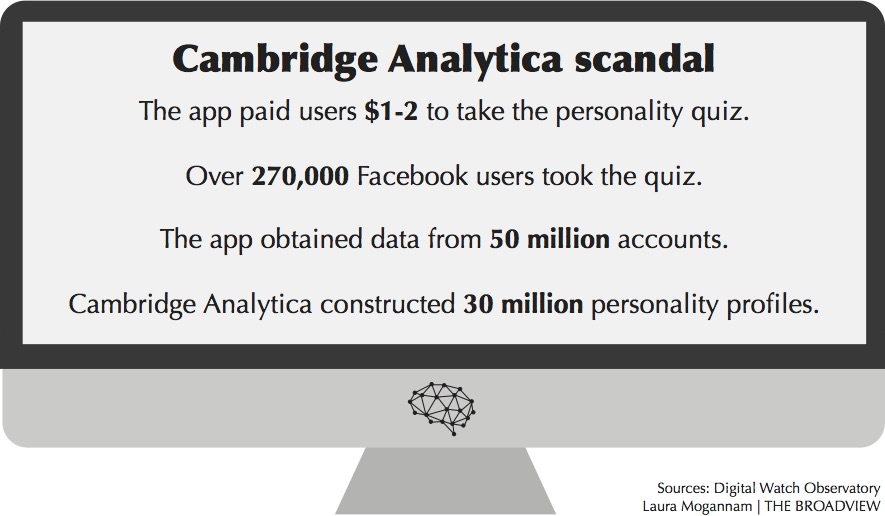 Many teens often take various trivia or personality online quizzes in their free time, however, some online quizzes lead to possible breaches in privacy, such as in the recent Cambridge Analytica scandal which functioned through a personality quiz app on Facebook.

With more than one billion daily users, Facebook dominates the online world of social media, providing a popular networking service for both adults and teenagers, but data collection of personal details has left many users second-guessing their presence on the network as their privacy may be jeopardized.

“I’m just so used to taking fun online quizzes that I never really consider the possibility of my information being taken,” junior Amelia Estes said. “I don’t think that many kids our age do, but this is a good learning opportunity.”

Ninety-eight percent of students said that they have taken online quizzes before in a school survey of 85 respondents, and 80 percent of respondents recorded taking them at least once a month.

Facebook became a subject of controversy last month after news broke that the company may have shared user data with third parties, such as British political consulting firm Cambridge Analytica, which recently announced its closure.

“This whole scandal has reassured me of the importance of remaining vigilant as to what I put out on social media,” junior Caroline Schulberg said. “Any photo or information that you share online could be leaked so I’m now very aware of that when choosing what to post on my accounts.”

Alexander Nix, the founder and now-suspended CEO of Cambridge Analytica, said the firm has been involved in over 40 United States political races and 200 international elections.

“It is a little concerning to think that a foreign company could have played a large role in the U.S. election and that Facebook may have known,” sophomore Isabella Shea said. “It makes you question our democracy.”

The extent of Cambridge Analytica’s involvement in the 2016 election came to light in March, when British television station Channel 4 News aired undercover footage of Nix and his colleagues discussing their use of bribery and slanderous advertising to undermine their clients’ political opponents. Soon after, Facebook banned Cambridge Analytica from advertising on its platform.

“I am aware how this looks, but it is simply not the case,” Nix said in a statement responding to the aired undercover videos. “I must emphatically state that Cambridge Analytica does not condone or engage in entrapment, bribes or so-called ‘honeytraps,’ nor does it use untrue material for any purpose.”

Facebook CEO Mark Zuckerberg said that Facebook demanded that both data scientist Aleksandr Kogan — the developer of the application that enabled the data collection — and Cambridge Analytica delete all the data that they may have collected but admits that the company failed to conduct an investigation after both parties said that they had deleted any information.

“I started Facebook, and at the end of the day I’m responsible for what happens on our platform,” Zuckerberg said in a Facebook post published on his personal account on March 21. “We have a responsibility to protect your data, and if we can’t then we don’t deserve to serve you.”

Zuckerberg was asked to testify before the United States Senate Committee on Commerce, Science and Transportation in April where he answered Senators’ questions regarding how Facebook collects users’ data in connection to Kogan and the Cambridge Analytica Scandal.

While Facebook outlines that the platform has access to all the content its users provide them in its Data Policy — including users’ device information settings, software names, GPS location, mobile phone numbers and IP addresses — Facebook does not sell data to third-party advertisers, according to Vice President of Advertisements, Rob Goldman.

“We do not tell advertisers who you are or sell your information to anyone,” Goldman said in a blogpost. “That has always been true.”

Fifty one percent of American adults said that they did not trust the platform, according to a survey conducted by Reuters, and Facebook stock took a 14 percent dip in March. Users also voiced their anger towards the social network on Twitter with the hashtag #DeleteFacebook.

“I’m glad that Cambridge Analytica is closing and that Facebook has acknowledged its wrongdoing, but I don’t think that will solve the problem,” Schulberg said. “This a problem brought on by this new generation of technology and it’s probably much more widespread than we know. Our generation will most likely be the one to take steps against privacy violations like these.”