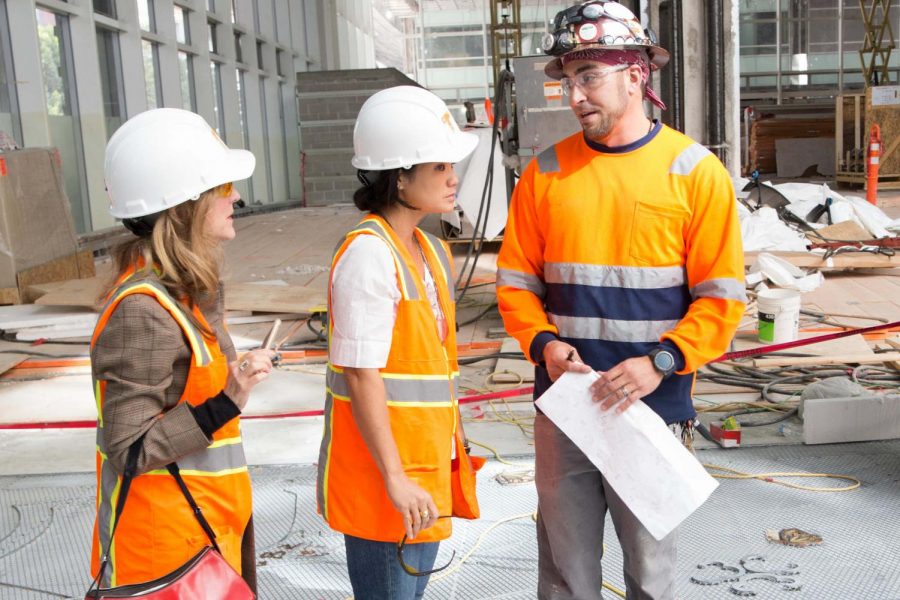 Former art teacher Julie Chang oversees the installation of the 23,000 square foot terrazzo floor she designed for the Grand Hall of the new Salesforce Transit Center. Chang’s piece is one of four public artworks created for the Transit Center.

Thousands of public transportation users will walk on former Convent teacher Julie Chang’s artwork — a terrazzo floor depicting a garden of poppies, laurel leaves, hummingbirds and geometric designs — as they dash to catch a train or bus at the new Salesforce Transit Center August 10.

The center will replace the old Transbay Terminal in downtown San Francisco and will be a hub for 11 transportation systems, including Muni, Bart and the California high-speed rail to Southern California.

“The piece evolved to include local flora and fauna,” Chang said. “I was already using the language of textiles in my larger body of work, but once I learned of the 5.4-acre green rooftop, that was planned for the building, I felt drawn to make the connection to Victorian gardens.”

Chang had recently received a Master of Fine Arts from Stanford University in 2007 when the project started nearly a decade ago.

The TJPA committed $4.75 million to the public art program to fund the four public art pieces in the Transit Center created by Chang, Jenny Holzer, James Carpenter and Ned Khan.

“City agencies are required to save a portion of their budget for artwork for the public,” Falvey said. “The TJPA was not required to do that, but they did it anyway because the center is so important.”

The SFAC’s original list of 32 artist candidates was first narrowed down to 10, then to the current four by a committee after conducting phone or Skype interviews with each of them. The artists were then invited to develop a proposal for one of the spaces in the center allocated for art, according to Jill Manton, Director of Public Art Trust and Special Initiatives for the SFAC.

“Julie made a presentation that was so strong and resonant to the committee that she was a unanimous recommendation,” Manton said. “She’s just hit one high point after the next. Watching her work with the local terrazzo fabricator was very enriching — a true collaboration.”

Chang’s art will be seen by thousands of people each day from all over the city and the world when walking through the center.

“It’s a great privilege to have my work be in conversation with so many and to be able to create something that will hopefully bring some surprise and delight into people’s daily lives,” Chang said.

Having a public art piece is very different from Chang’s background in fine art, where pieces are often disappear into private collections after being displayed in a gallery, according to Chang.

“It feels pretty exciting having the work feud and interact with an audience of so many people and not necessarily an art viewing audience,” Chang said. “That’s a big part of public art — it brings what is rarified into the public sector.”

The Salesforce Transit Center will also offer many restaurants and shopping experiences, in addition to the transportation, rooftop garden and art installations.

“We think the art is going to be an attraction bringing people to the Transit Center, whether they need to get transportation or not,” Falvey said. “We’re looking to make the Transit Center a destination and the public art program helps us do that.”

The art also is extremely functional for parents with younger children, as kids will be able to play games using the colors, animals and plants while they wait for their transportation, according to Manton.

“It also adds color as a level of cultural enrichment to the building that the architecture just doesn’t convey, and maybe is not its job to convey,” Manton said. “I think that people, whether they are art aficionados or know nothing about art, will find something in her artwork that that appeals to them.”