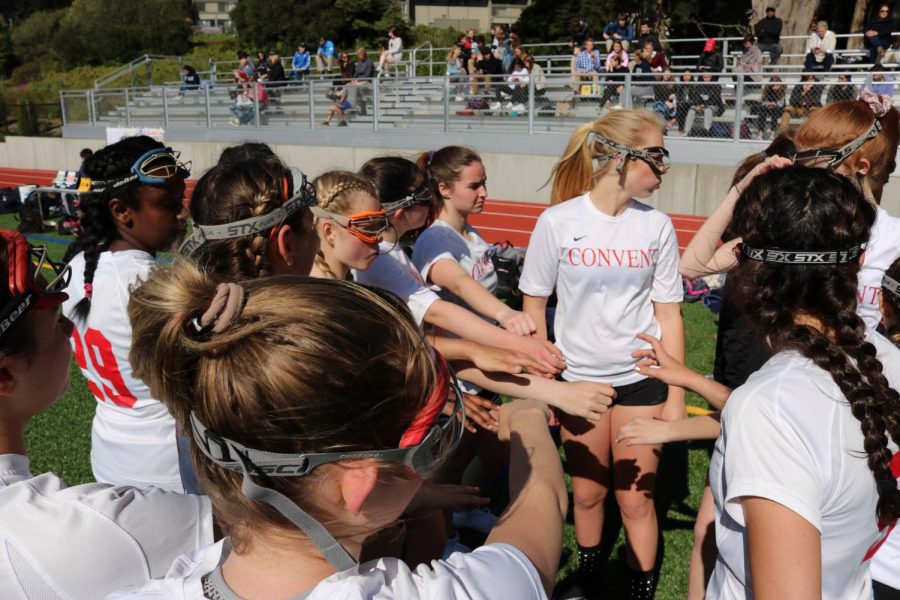 The lacrosse team huddled up before the first half of the game. Convent won against Bay High School with a final score of 11-9.

The lacrosse team was added as a spring sport this year and will become a varsity team next year.

“We practice two days a week and people have been pretty consistent showing up,” athletic director Elena DeSantis said. “We plan to continue [next year] with the same dedication and commitment to the sport.”

“I joined lacrosse because I thought it would be a really good opportunity to try a new sport,” Froeb said. “I knew that I would be able to get to know more people through this sport and also spend time on my athletic abilities.”

The players began practicing after spring break and have developed new skills such as passing, catching and learning the rules of the game.

“I think that helping beginner players is super fun,” junior Rachel Cramer said. “I get to improvise and make it more of a fun experience for them than a super serious one.”

Players who are more experienced are able to help coach others who are just learning according to DeSantis.

“It’s been really exciting to see the people who have a lot of skill share their knowledge and their passion for the game,” DeSantis said. “It’s also been exciting to see the learning of the beginners who are super excited to get better and also to see everyone’s improvement.”