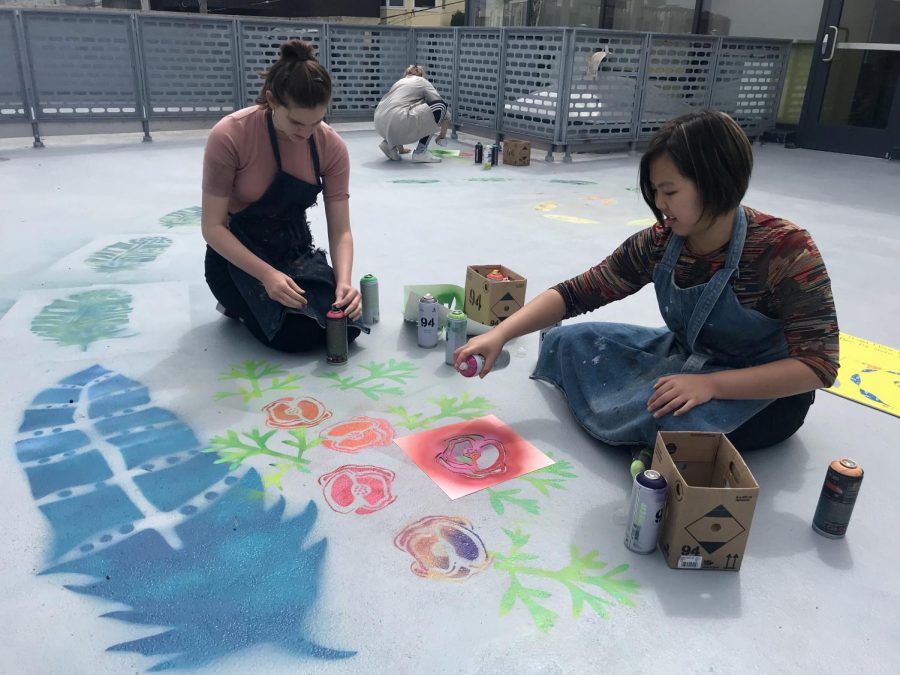 “The end goal of this space is actually to use all aspects of STEAM — science, technology, engineering, art and math — and turn it into a classroom,” junior Grace Boudreau said. “There is also a lot of intentional blank spaces left open so other generations can add to it.”

Boudreau and junior Maggie Walter are helping with the mural for their IB CAS project, which engages students in creativity, activity and service, while sophomores Abby Widjanarko, Cat Webb-Purkis, and Avani Mankani are helping for their Art Foundations II class’ public art project.

“It feels really good to be benefiting my community because we get to bring some life and color to what used to be just random swatches of spray paint on the ground,” Widjanarko said. “Now, it’s really pretty.”

Norma Gely, a graduate student at Academy of Art University, was assisting with the mural and creating a  video of the creation process for her project-based curriculum capstone project.

“When [art teacher Rachel McIntire] gave me like a tour of the place, I saw that this space needed some life, so I proposed why not do a mural,” Gely said. “Why not give it life and also create a study space.”

Part of the inspiration for the mural was a scavenger hunt for the elementary school based on the Fibonacci spiral, according to Gely.

“It feels really good to add to our community through art, even though I wouldn’t define myself as an artist,” Boudreau said.