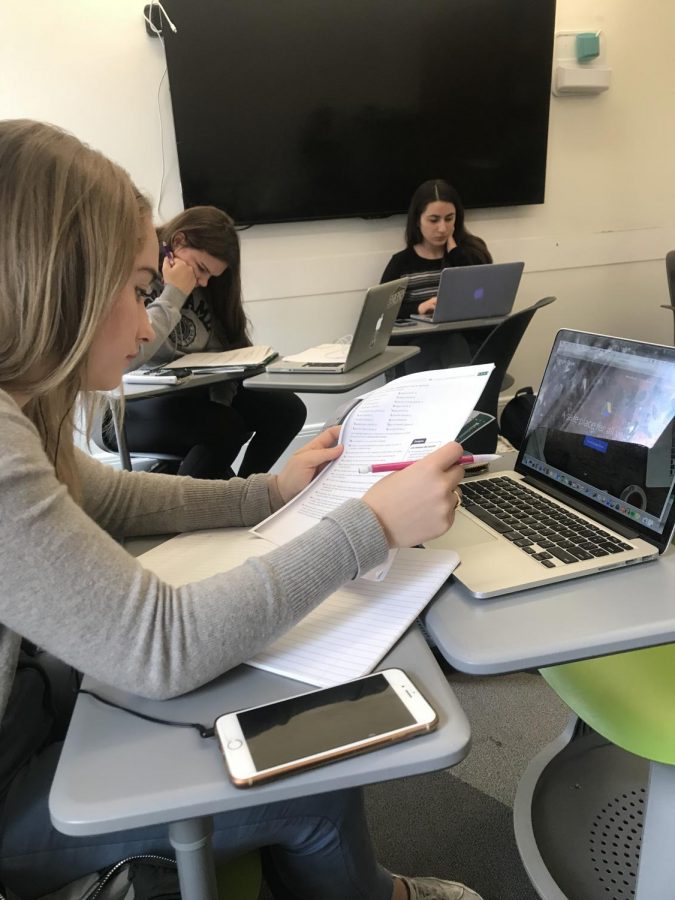 Junior Caroline Schulberg works on her individual cultural topic during class time. Students had the option of either reading a Spanish novel or researching a cultural topic, the majority chose to research.

WEB EXCLUSIVE As a part of their final unit, Honors Spanish 4 students chose to either read the novel “Como Agua Para Chocolate,” or research a cultural topic such as the fusions of culture or technological advancements throughout the rest of the month.

“I chose to read the book because this will be my final year taking Spanish and I wanted to read this novel as a culmination of my seven year Spanish ‘career,’” junior Wellsley Cohen said. “I wanted to understand and appreciate a classic Spanish novel about food, family, traditions, love and coming of age, and it has been rewarding to finally have the tools to be able to read a piece of literature such as this one.”

International Baccalaureate Higher Level students in the class were required to read the novel due to specific IB Programme requirements.

“I think that being able to read a book in Spanish seems really daunting because in the past we have only read passages or short stories in class,” junior Sophie Mack said. “But because I have to follow along with the characters and the plot, I have to force myself to understand, which I think is improving my Spanish skills in the long run.”

For the remaining class periods, depending on which project the students choose, class time will be spent either reading the novel as a group or reading articles and answering questions for the research project, as well as a few listening, speaking, and writing assessments along the way for both projects, according to Spanish teacher Mary Bicanic.

“I wanted to provide a meaningful way for everybody to continue advancing their skills, their vocabulary, and achieve something really rigorous,” Bicanic said. “So for those reading the novel, they can say that they have read a novel in Spanish and feel good about that and for those that tackle a research unit on their own, it is also an achievement while getting to learn more about a cultural topic that interests them that we have not had time to cover in class.”

The end of the year can be a stressful time for students filled with many important exams, according to Bicanic. With these two options presented to them, students were allowed to choose how they would like to end their year in Spanish class, according to Cohen.

“I think that by allowing the class to decide if they wanted to read the novel or do the cultural project, we could then pick which one we were more interested in and then really immerse ourselves into it, rather than being told we had to do one or the other,” Cohen said.