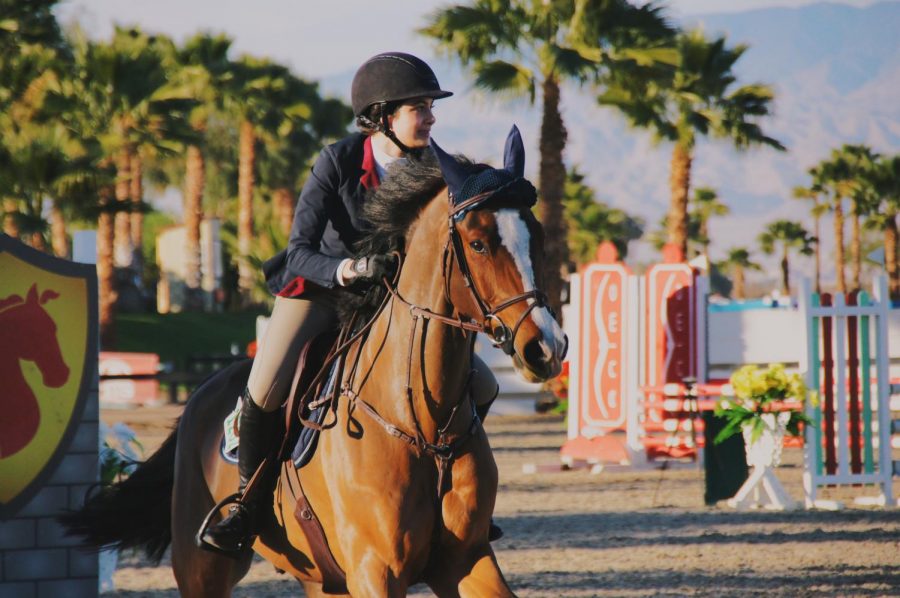 Junior Sofia Pirri competes in the Thermal Horse Show in Southern California, placing fifth. She has been riding competitively for four years.

While many students change into jerseys, shorts, and sneakers before heading onto a court or field after school, others don helmets and boots when heading over to the stables.

“I love working with animals, so I love the horse aspect of it,” senior Francesca Petruzzelli said. “I’ve loved getting to build relationships with my horses.”

Petruzzelli rides between three to five times a week, providing her with a break from school.

“I love being outside and away from the City,” Petruzzelli, who rides on Kings Mountain on Skyline on the Ridge between Redwood City and Half Moon Bay, said. “It’s a great time to just focus on what makes me happy and take a step back from my crazy life.”

Some horseback riders also participate in competitions, such as junior Sofia Pirri, who has been riding competitively since she was 13.

“I am a very competitive person, and competing on my horse where I have to race around a course and jump gives me a rush like no other,” Pirri said. “It is a lot harder than people think to have a connection with your animal and be able to run and jump with them.”

Horseback riding teaches leadership and how to care for another living being, but most importantly, how to communicate with an animal, according to Petruzzelli.

“A 1200 pound horse can easily overpower me and not do what I ask,” Petruzzelli said. “I think it’s incredible when we clear massive jumps because we’ve literally put our lives in each other’s hands, which takes a tremendous amount of communication and trust.”

Although it requires teamwork between the horse and the rider says Petruzzelli, some may think that horseback riding is not a team sport.

“The horse plays such a tremendous role in the team and they often go overlooked,” Petruzzelli said. “My first trainer used to say it was a rider’s job to be almost invisible in order to showcase the horse. I agree with that philosophy.”

Pirri says another misconception about horseback riding is that it is an elitist sport.

“People think that everyone who rides is a stuck-up brat,” Pirri said. “I’m not gonna lie, it is an expensive sport, but I have met some of the most wonderful people from it. In the end, we’re all in it for the love of animals.”

Horseback riding opportunities and proximity to barns was something that played into the college decision-making process for Petruzzelli.

“All of the colleges I’ve applied to had very good equestrian programs with barns either on campus or right next to the campus,” Petruzzelli said. “I’m very excited to continue my riding journey in college.”