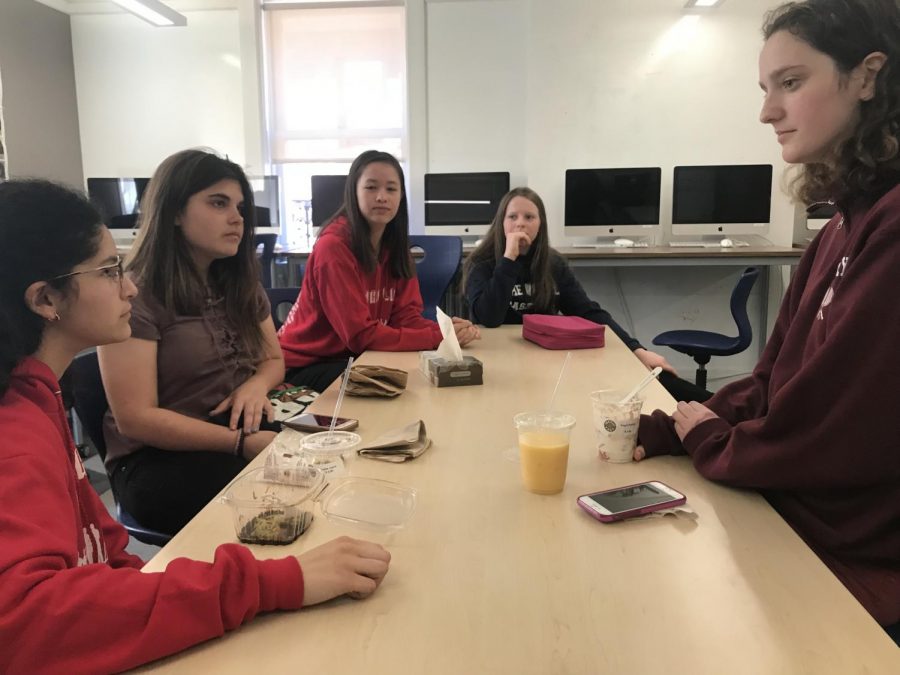 The Philosophy Club meets for their weekly Monday discussion. The club is currently only freshmen but is open to accepting students from any grade level.

WEB EXCLUSIVE The Philosophy Club, made entirely of freshmen, met today at lunch in room 207 for their weekly discussion on moral decisions and how they affect world communities.

“We created this club so that we could talk about thought-provoking ideas,” freshman and co-founder of the club Audrey Pinard said. “Putting yourself into an equation that may or may not come up in your life can help people see how others might react and how actions could affect others.”

The club has discussed issues such as the trolley problem, a dilemma that experiments with human morality and the consequences of actions, according to freshman and co-founder of the club Audrey Scott.

“The problem makes you think about if you were to have a trolley which was about to run over five workers but you had a leaver that could switch to [the train] to another set of tracks that would kill one person instead of five, would you do that?” Scott said. “I am really interested in talking about other people’s ideas and seeing how that can ultimately change perspectives.”

Some faculty members, such as math and robotics teacher Chris Person-Rennell, have had an interest in Philosophy since early in their careers and have thus attended the club’s discussions.

“I began to become interested in philosophy when I was a freshman in college when I took a number of courses and I almost actually majored in it4,” Person-Rennell said. “I think that taking the time to be a critical reasoner and to think about things from multiple perspectives and really investigate why you might think or believe something is important at any school.”

Students such as Pinard wish to pursue philosophy past high school and into college to continue to question why people act in the patterns that they do.

“Personally I would like to continue participating in a philosophy club in college and take philosophy courses,” Pinard said. “I think it is a great way to get a better understanding of other people because in the real world you never really know how other people would react in different situations.”