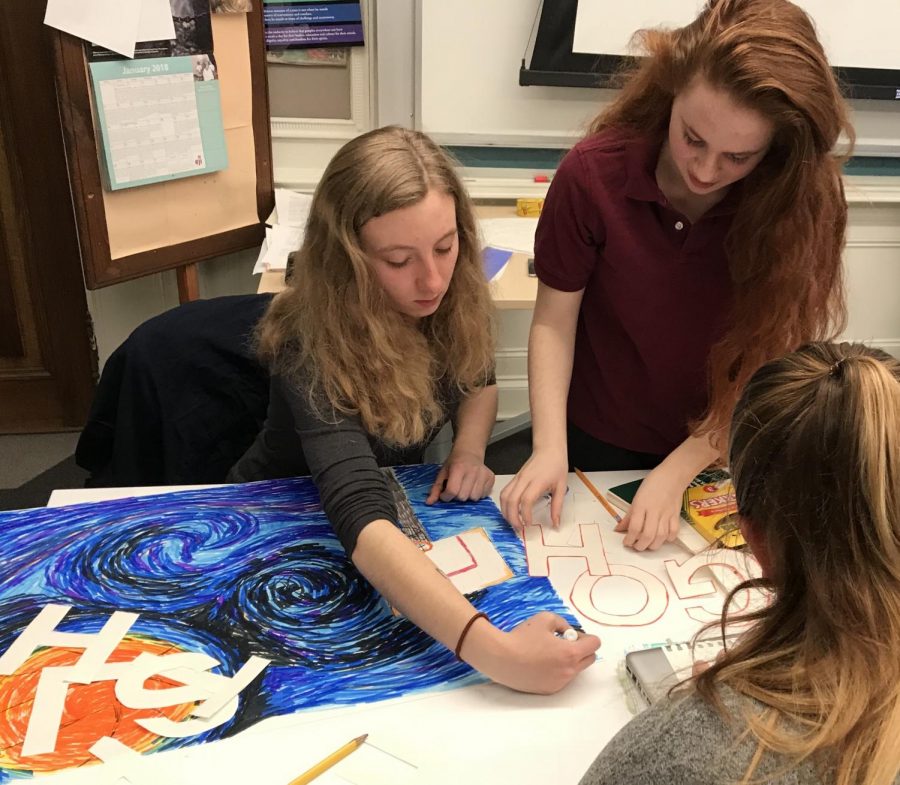 Senior Sydney O'Neil colors a poster in her AP Art History class that will be used to support the Stuart Hall Knights in their basketball championship game. The poster will read 'Van Gough.'

Members from both high schools bussed to the Golden 1 Center in Sacramento — the home court of the NBA’s Sacramento Kings — this morning to support the team, and live out Goal 4 of the Goals and Criteria: “the building of community as a Christian value.”

“Having this basketball game and having the whole school go is a really good opportunity to bring us together as one big community,” junior Kate Etter said. “It’s also a great opportunity to create school spirit and bring more attention to sports.”

Some students spent their lunch period on Wednesday making posters for the game but ran into difficulties because both competing schools’ mascot is the Knights.

“We couldn’t use ‘the Knights’ on the posters because the [View Park] team is also the Knights,” junior Poppy Cohen said. “There was a poster on Saturday at the semi-finals that the opposing team made that said ‘Sorry, it’s not your Knight,’ but we can’t do that for the other time because we are also the Knights.”

Instead, students painted the posters with slogans like “Rep the Hall” and “We the North 415,” which references the Bay Area’s area code.

Convent & Stuart Hall will not only have posters in crowds, but two small mascots — the children of history teacher Sarah Garlinghouse and art teacher Rachel McIntire — cheering the team on.

“We were worried about not getting back in time to pick up our kids after school,” McIntire said,“so we are bringing them and dressing them up as either as a knight and princess or as good luck fairies, so they will be casting good spells on the players.”

Today’s game is the first time a team from Convent & Stuart Hall has made it to the state championship in any sport since Convent’s basketball team won the title in 2003.

“I went to the semi-finals Saturday and was so impressed by how well [the team] played together and by the student spirit,” McIntire said. “It is just so wonderful to see the entire community embrace this as an opportunity for us to be together.”