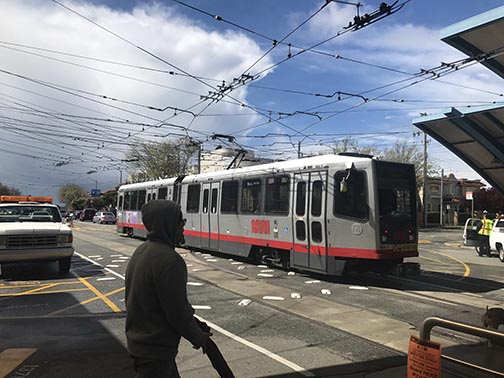 A current model Muni train leaves from the West Portal station. Muni began transitioning out the older trains at the end of 2017, and will fully replace all the trains within 10 years.

The San Francisco Municipal Transportation Agency has started its largest renovation in over 30 years as it begins to gradually introduce a new fleet of low-maintenance trains to the public.

The local community contributed ideas for the new vehicle developments in rider safety including improved braking and door systems as well as wider aisles and quieter cars.

“Muni is really convenient for me because the train stop is less than a block from my house,” sophomore Estie Seligman said. “Since I ride it so often and since I see the problems with extreme crowds all the time, I’m looking forward to more comfortable seating and standing areas.”

The trains, designed by Siemens, are being added over the course of 10 years in phases, replacing all of the 151 current vehicles and increasing the total number of trains to 215.

The trains have energy efficient systems such as brakes that collect energy when in use and LED lights throughout the cab, according to SFMTA’s Deputy Spokesperson Erica Kato.

“The trains cost $1.2 billion and were paid for as a reserved part of our budget, as well as from grants and other sources,” Kato said. “The funds draws from sales tax, revenue bonds, and general federal funding.”

The entire Muni system is a great, cheap and effective alternative for young people who cannot drive, according to junior Hannah Kelliher.

“I live near West Portal where some of the Muni trains go right by my house,” Kelliher said. “I haven’t ridden the new trains yet but I think the system will be a really great development because sometimes the trains can get really crowded.”

“It’s important to upgrade public systems like the Muni because so many people in San Francisco utilize them every day,” Kelliher said. “I’m glad the upgrades aim to make the Muni run even faster and without less issues because they can be really slow with frequent breakdowns.”

The trains began testing in 2017 and SFMTA is planning to implement 68 cars by the end of the year.

“It is important for our riders to feel safe and comfortable aboard Muni,” Kato said. “We will be testing each new train that goes into service and [then we can] add the trains to the existing lines.”