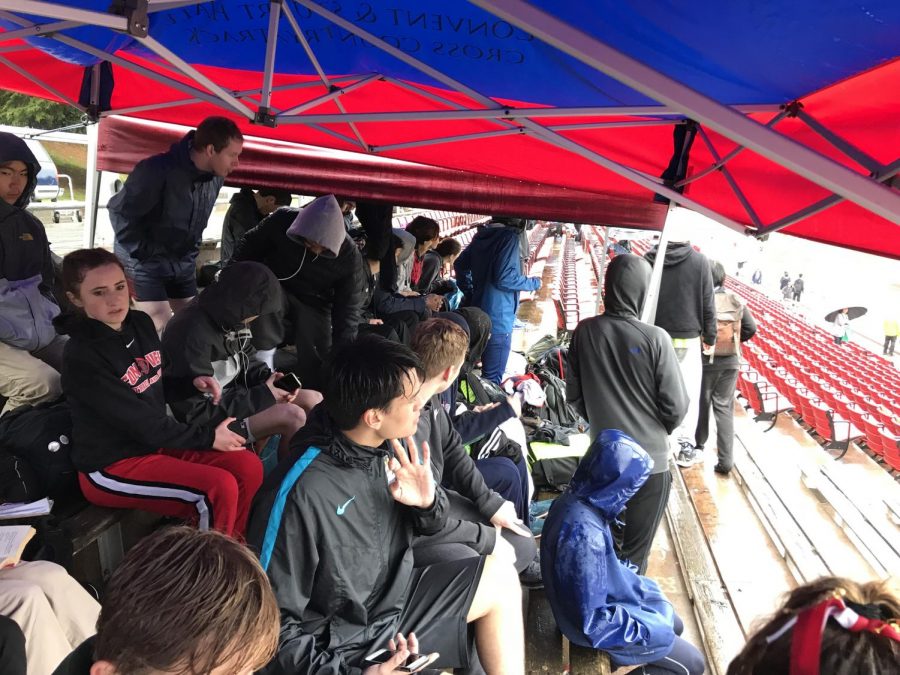 Athletes sit under the team tent to protect themselves from the rain while watching the races. The rain stopped in the late afternoon.

WEB EXCLUSIVE The Convent & Stuart Hall track team competed in the first BCL West meet of the season, but many events were canceled due to harsh rain and winds.

“Racing in the rain is hard because your body is shivering and it requires so much more effort to do well on a slippery track,” sophomore Ryann Minnis said. “It’s also hard to make yourself run when you’re freezing cold.”

The rain stopped in the late afternoon, but runners in earlier events persevered in spite of the conditions, according to track coach Alyson Barrett.

The freshmen girls in sprinting events also did well, with freshmen Katrina de Mesa finishing first in her 100 heat.

“The race was really stressful because I was so worried about dropping the baton or falling,” de Mesa said. “I tried to stay optimistic before races and focus on going as fast as I can.”

The team has been practicing since February and have gone to many invitationals in preparation for this meet.

“The team has been training very hard consistently, and I think their work is really starting to come through in their races,” Barrett said. “If they can do well in those conditions, our season going forward is looking pretty good.”

All jumps, hurdles and the discus events were canceled due to the rain. Scores will be made up at the second BCL West meet on April 17.