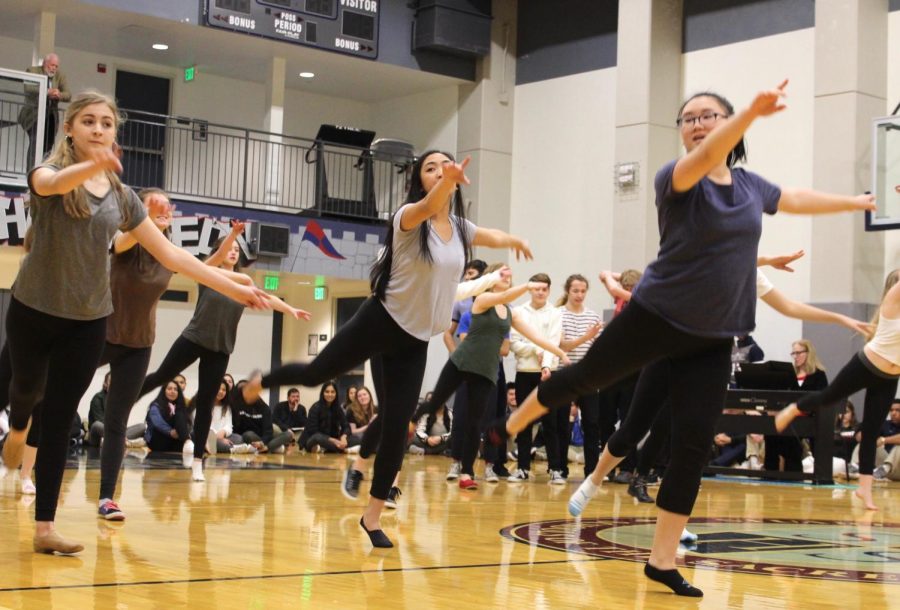 Freshman Grace Krumplitsch and juniors Bianca Mercado and Tommie Akamine perform the opening dance of "A Chorus Line" during the Convent & Stuart Hall pep rally last week. The cast and crew have been rehearsing the musical since December.

WEB EXCLUSIVE Convent & Stuart Hall’s cast and crew performed the opening night of “A Chorus Line” by James Kirkwood Jr. and Nicholas Dante tonight at 7 p.m. in the Syufy Theatre.

“A Chorus” Line, set on a bare stage, follows 30 dancers as they audition for a spot in an eight dancer chorus line. The musical also showcases the individual lives and experiences of the actors and their personal reasons for becoming dancers.

“‘A Chorus Line’ is all about what it’s like for a performer to audition for a show,” senior Francesca Petruzzelli, who performed the role of a co-director, said. “As the show goes on, the dancers learn that everyone brings their own personal story to the audition and that there is more to each person than what is simply on their resume.”

The minimal staging and colorful lighting reflect the emotions and unique stories of each character in the musical, according to stage manager Kelly Rosanelli.

“The main point of the show is the characters telling their own story and we wanted the staging to support this,” Rosanelli said. “Instead of building a set, it was more about deciding what colors work best for a song or what design makes the most sense for a particular point in the show.”

The musical begins with a fast-paced dance, “I Hope I Get It”, where each performer embodies a certain emotion such as anxiety or excitement, representing the various feelings actors experience when auditioning for a show, according to Petruzzelli.

“The dancing was so impressive, and there was just so much talent on the stage,” English teacher Rachael Denny said. “Each actor brought themselves to the role which made it feel so real. Overall the performance was exciting, poignant, funny and even made me cry.”

The penultimate song, “What I Did for Love,” describes how the sacrifices each dancer makes during their career will never be regretted and was done out of love for performing, according to Petruzzelli.

“‘What I Did for Love’ is so moving, and one of my favorite parts of the show,” Petruzzelli said. “It does a good job of summing up the musical by talking about what everyone in the cast has done in order to dance and everything they have given up to audition.”

Tickets are $10 and can be bought online or at the door. There will be two more performances tomorrow at 7 p.m. and Saturday at 2 p.m.