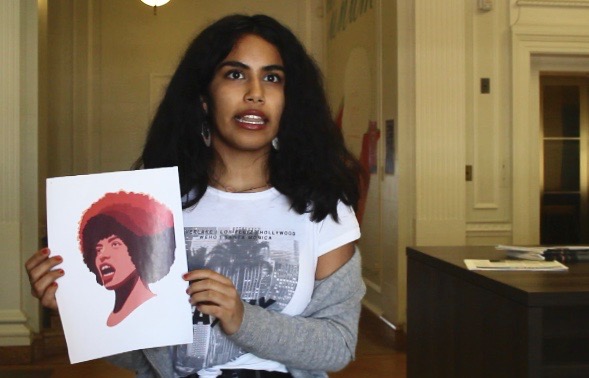 Sophomore Malinalli Cervantes explains her artwork during an interview. The women in the piece is based off of Angela Davis, and is meant to be a representation of strong women.

WEB EXCLUSIVE Communities across the world celebrated International Women’s Day, a day aimed to highlight the strength, unity and accomplishments of women across the globe.

“Being a woman to me means being able to combine a caring and loving spirit with a firm head and a generous heart,” Head of School Rachel Simpson said. “Women have a voice, and to empower a women’s voice is to lift up one another and being in service of one another while continuing to be our best selves.”

A trending during the past year, the feminist movement has become more powerful and the support for women has grown massively.

“International Women’s Day shows me that times are changing,” junior Amelia Estes said. “Women are strong, and now there are more women in positions of power showing off what we can do.”

The first IWD celebrated in the United States was on February 28, 1909. The movement has been around for over a century but has recently gained traction due to the Women’s March and #MeToo, according to Director of Student Life Devin Demartini-Cooke.

“The Women’s March last year identified questions like ‘Now what? How does this make a difference?’” DeMartini-Cooke said. “It’s not just people talking about change but instead asking what’s the next action we can take.”

Every year IWD has a different theme, this year’s being “#PressforProgress” with the intention of motivating women to continue the fight for gender equality.

“#PressforProgress is capitalizing on the women’s movement this year with #MeToo,” DeMartini-Cooke said. “We’ve seen a huge rise in women running for office, so I think It’s moving that dial forward on gender equality and equal representation, whether it be through pay or positions.”

Gender parity will not be a complete reality for another 200 years according to the 2017 Global Gender Gap Report, but every small action of advocacy and support is important and something taken very seriously at Convent & Stuart Hall, according to Simpson.

“[The Society of the Sacred Heart] was founded by women because there was a belief that it was part a women’s power to transform and heal the world after the French Revolution. I carry all of that tradition proudly as I try to navigate what it means to be a woman and educate women today” Simpson said. “It means something to be in a school that was founded by women in service of women; as Madeleine Sophie Barat said, ‘It is the gift of a woman to make an incalculable difference in the world.’”