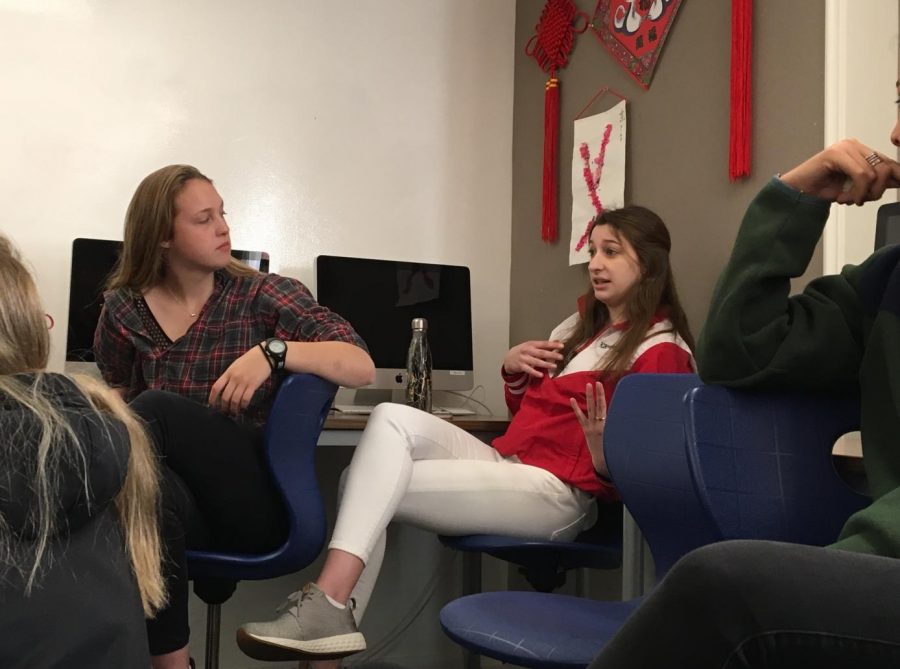 Junior Kiki Apple shares her opinion on the Second Amendment during her Theory of Knowledge class. The class postponed the lesson plan to discuss their perspectives on issues arising from recent school shootings.

WEB EXCLUSIVE In light of the recent school shooting at Marjory Stoneman Douglas High School in Parkland, Florida, juniors discussed their opinions about gun violence in their Theory of Knowledge class this morning.

“The ability to have discussions is really important,” Theory of Knowledge teacher Paul Pryor Lorentz said. “We have a very well-read and attentive student body, and there’s a lot [they] can learn from each other.”

Lorentz opened up the conversation about violence and school safety after a junior proposed the idea last week. The discussion led to a conversation covering topics such as gun control and mental health.

“Once people’s right to bear arms starts infringing on my right to life, liberty and pursuit of happiness,” junior Camilla Sigmund said, “it’s no longer a right and I think it should be taken away.”

Junior Kiki Apple also shared her thoughts on the controversial issues and said that the government and laws should adapt more to the current time period to avoid tragedies like school shootings.

“It’s really important that we recognize the Second Amendment was made during a time in which it took two minutes to reload guns,” Apple said. “Now we have automatic and semi-automatic guns which can kill a mass amount of people in a couple seconds.”

“Theory of knowledge is continuing to ask the question of ‘How do we know what we know?’,” Lorentz said. “The gun control conversation is not explicitly tied in with TOK, but I think any teacher in any subject area can give students the space to have deep conversations, even if it’s not directly related to their work.”