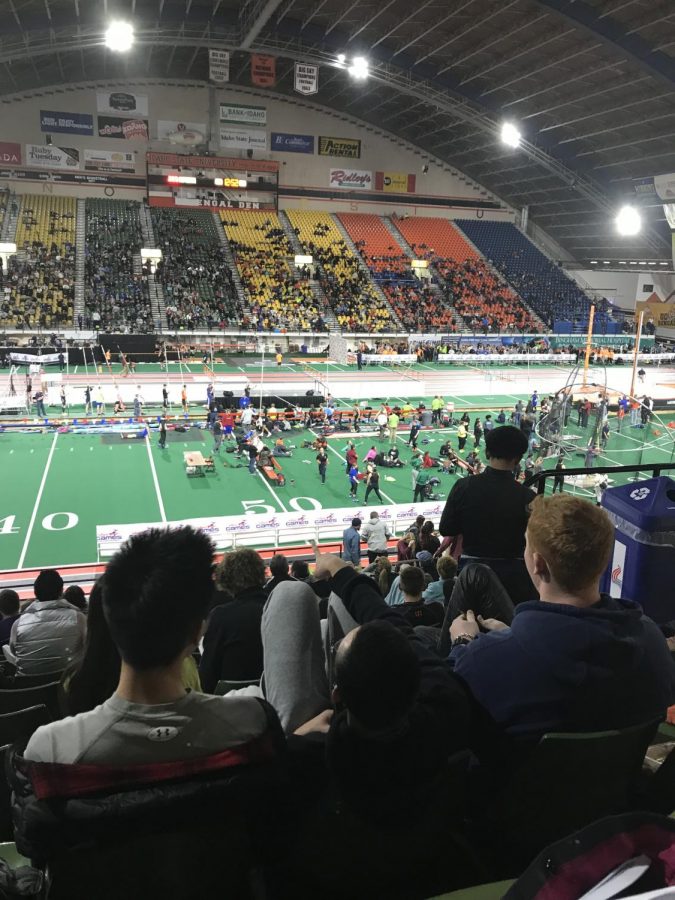 Eleven Convent & Stuart Hall runners competed their first meet of the 2018 season at the 40th annual Simplot Games in Idaho. The team compete on an indoor track constructed of wood which is only 200 meters long compared to a standard 400 meter track.

WEB EXCLUSIVE Track and field athletes from across the nation and around world from countries such as Australia, Norway and New Zealand gathered this weekend at Idaho State University to compete in the Simplot Games.

The three-day competition began with two days of preliminary races and qualifiers and the final day set for finals. The meet allowed Convent & Stuart Hall runners to work on personal development, according to junior Sofia Pirri.

“It was an interesting experience to compete in a race with such a variety of people,” Pirri said. “One thing I learned specifically during the meet was in order to run the 100 meter hurdles, I need to focus on having my pace and keeping an elongated stride.”

Runners were able to use their fitness training from practice during the Simplot Games, according to sophomore Ryann Minnis.

“I hope to bring back the importance of doing weights and core [in practice] because it gives you a strong foundation  and lets you really push yourself,” Minnis said. “I usually put more emphasis on my technique and becoming fast, which is important, but I don’t focus as much on the underlying things like getting strong and doing core which could help more in the end.”

The ability to travel away from San Francisco aided athletes in viewing a higher level of competition, according to track and field coach Michael Buckley.

“I think the biggest thing we improved on was our camaraderie and our ability to feel friendship with each other,” Buckley said. “Sofia [Pirri] and Ryann [Minnis] got to go down and see a couple of young women from Calgary, Canada, who are among the best in their country competing in the 60-meter hurdles. Just to see them in action helps to point our runners in the direction for the future.”

“I talked to Andre Phillips and his favorite part of the Olympics was meeting other people,” Minnis said. “Even being in Idaho and meeting kids who are from Canada was really interesting because there is a big running community, and I got to meet people at the top of their event.”

Traveling to Pocatello exposed runners to a more advanced playing field and brought the team closer together, according to Buckley.

“I think that there was an aspirational quality of coming to this meet, giving everyone a chance to see what the highest levels of competition are in the sport and a sense of what they can aspire to in the future,” Buckley said. “It is just fun to get away from San Francisco and see kids from other parts of the world and in a completely different place.”