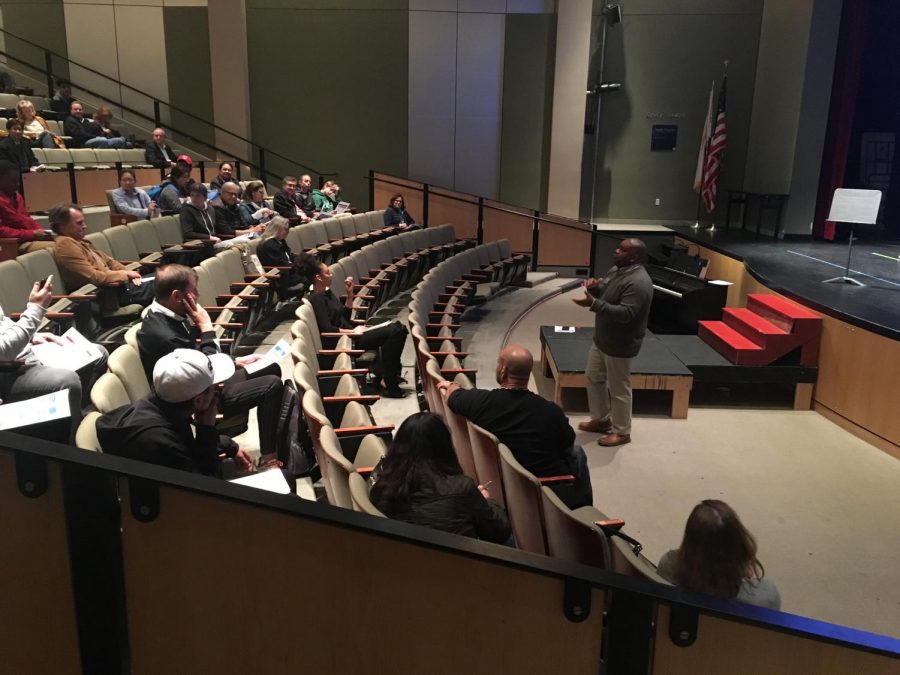 Head of Athletics Anthony Thomas speaks about his vision for Convent and Stuart Hall athletics. Thomas emphasized the importance of athletes being committed and showing up to all practices and games.

WEB EXCLUSIVE Coaches and families of spring sports athletes gathered in Syufy Theatre to hear from new Head of Athletics Anthony Thomas and learn about the upcoming season.

The spring season officially began last Monday, but Thomas held the orientation tonight to welcome families to the new season and introduce them to their coaches, as team rosters are now officially completed.

“The orientation is a part of the school’s initiative to improve our athletics program,” badminton player Sydney Marquez said. “It was also a chance for parents to meet the new athletic director and learn about how they can support their children.”

The event included Thomas introducing the Instateam app, which will be used to inform athletes, coaches and parents of sports schedules and other useful information that pertains to each team.

“Everything we do now is on Instateam,” Thomas said. “Information comes faster through the app than through emails.”

Thomas also spoke about the importance of athletes taking the Baseline Concussion Test as a safety measure, as it allows easy access to that information in case of emergencies.

“We really want to make sure athletes have taken the test,” Thomas said. “We’re trying to do these tests on every student-athlete and hope to get every student to do one in the future.”

Learning how to be a part of a team by developing good habits is extremely important and one of Thomas’s main goals as the new Head of Athletics.

“It is the expectation of our program that kids show up to practice,” Thomas said. “We’re expecting that if you’re coming for two hours, you’re there the entire time.”

After Thomas’s presentation, teams were split up into smaller meetings with their coaches, allowing coaches to discuss their goals for the upcoming weeks and any necessary information for new parents.

“My dad really learned about the new goals of the athletic director to make the athletic program more competitive,” Marquez said. “Meeting coaches and discussing information about the season was informative and gave us as a family a sense of the goals set for this season.”