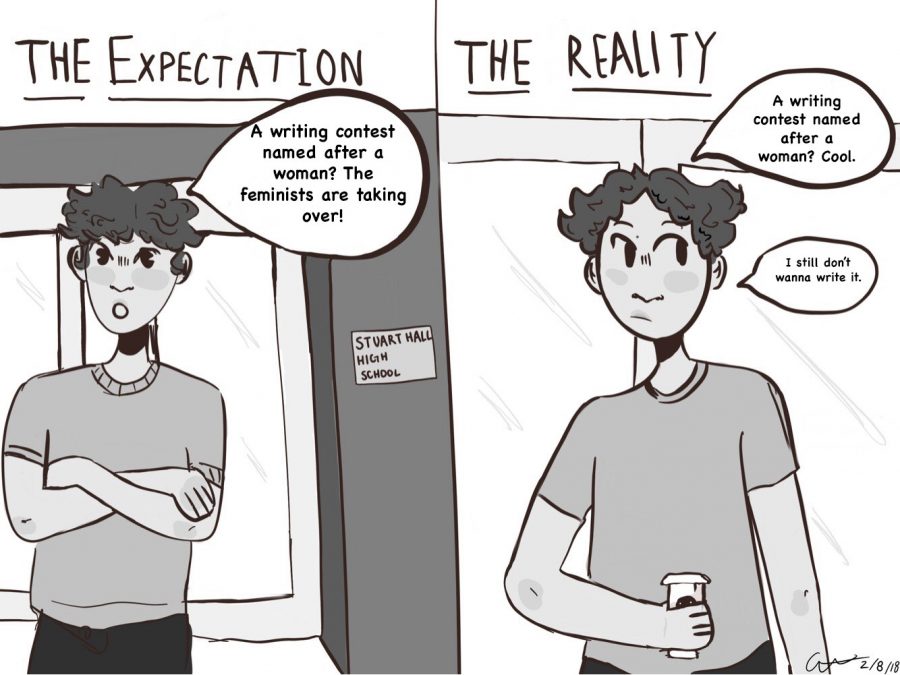 The previously-named annual Kate Chopin Essay Contest gives Convent students an opportunity to explore the world of creative writing, yet, changing the contest’s name sends young males the message that they cannot relate to a feminist writer.

Implemented over two decades ago by the English department as a way to celebrate the achievements of student authors, the festival was named after acclaimed American writer Kate Chopin, who attended a Sacred Heart school in St. Louis.

When students returned to campus this year after Christmas break, they were informed that the in-class essay contest is now simply titled “The Writing Contest.”

With the alignment of high school curricula and the decision to have a combined high school writing assembly with the Stuart Hall High School, concerns arose that it would be more challenging for young male writers to connect with a contest named after an author whose works are not included in their reading syllabus, according to Convent English teacher Julia Arce.

However, students do not read Kate Chopin’s works in their English classes until Senior Year, so most young women at Convent are in the same position as their male counterparts.

The issue of attracting the younger male audience seems to be a universal problem even in the world of professional writing.

When she first began writing, the now highly-celebrated author known as J.K. Rowling was asked by her publishers to initial her first name, according to an interview with CNN.

Her publishers wanted her fictional series “Harry Potter” to appeal to both boys and girls. The reluctance to use Rowling’s first name stemmed from concern that the story would not attract boys’ interest if they saw her female name, despite whether or not the book was successful and well-written.

When her first novel became a success and publicity required Rowling to attend events, she revealed her gender to the world. Now, 21 years after the first release of “Harry Potter and the Sorcerer’s Stone,” Rowling has managed to influence the imaginations of not just young girls but of boys and individuals of all ages across the world.

The gender of a particular author should not impact whether or not a reader choses to begin the first chapter — just as the gender also should not influence how a student writes in a contest.

Despite whether or not students have read Chopin’s works, she continues to be recognized today as an renowned writer whom the Kate Chopin International Society acknowledges as one of America’s essential authors.

Her connection with Sacred Heart schools as well as her accomplishments in writing constitutes her as a proper fit for the title of a writing competition composed to challenge young minds.

Female authors are historically less recognized than male ones, therefore as a school driven to educate the minds of strong young women and men, we should acknowledge the achievements of female writers and allow male adolescents to see through a lens other than their own.