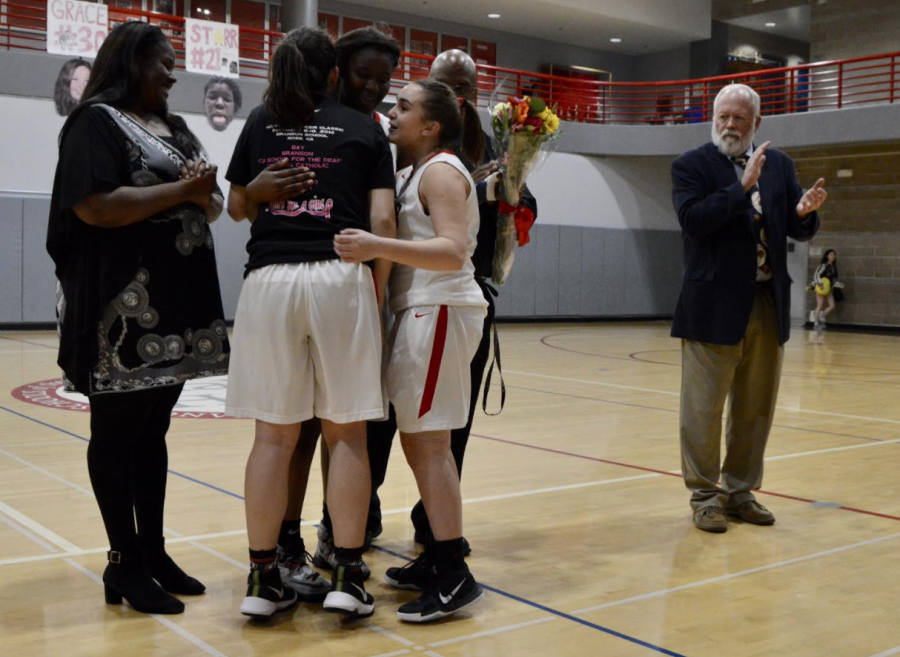 Junior Mason Cooney hugs senior Starr Hooper after Hooper was recognized in the Senior Night ceremony. Cooney and Hopper have been on varsity together for two years, and Monday was the final night that the two played on the same team.

“I’m so sad to see the seniors go,” junior Kiki Apple said. “They have been on the team since I was a freshman, and their enthusiasm and dedication to the team was very motivating for me when I first started Convent basketball.”

Senior basketball players were recognized on Monday for their efforts on the team over the course of their high school basketball careers, including Sydney O’Neil, who has played varsity for four years and was a team captain this season.

“Tonight is very bittersweet for me,” O’Neil said. “I have played basketball as long as I can remember, and it was always an outlet for me to destress and motivate myself. However, I am glad that I ended this chapter of my life with a loyal team that I love.”

All four seniors were acknowledged by coach Reynolds Marquette for their individual roles on the team and then given a bouquet of flowers.

O’Neil, who was injured for the first two weeks of the pre-season, joined the team in playing in a pre-season three-day tournament in Redding, California, in which O’Neil received an all-tournament award.

“A highlight of this season, both score-wise and quality-wise, was [the tournament],” Marquette said. “Seeing [O’Neil] bounce back after a debilitating injury and lead the team through the tournament to win two games was a reminder of the strength of this team and the girls in it.”

The team, led by captains Ainslie and O’Neil, played 11 games this season, with a record of 1-10, however, according to O’Neil, this record did not reflect the quality of this year’s team.

“One of my key takeaways from Convent basketball is that the score doesn’t matter,” O’Neil said. “Every game started and ended with our team making the best effort that we could, and the people you are with make the season, even if your record is not the best.”