Time to speak up 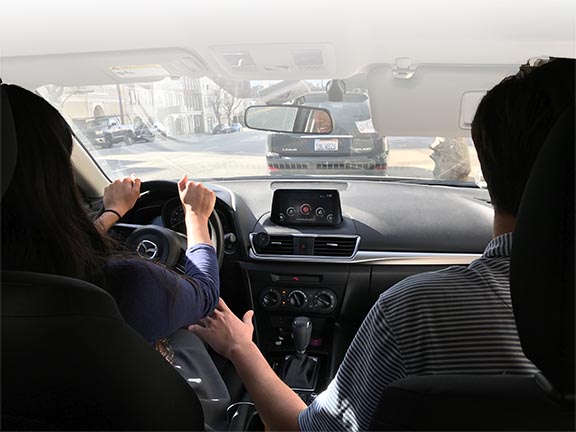 A seemingly average lesson with a popular San Francisco-area driving instructor turned into an uncomfortable situation for Ellie Miller Hall ’07 when he told her to pull into a rest stop off of the highway to observe traffic patterns.

“We got out of the car, went up there, talked about it, and then as we were coming back down he hugged me from behind and then nuzzled into my ear and kissed my ear,” Miller Hall said about her experience when she was a high school student.

Miller Hall did not come forward about her experience with Nelson Graves until this past October when she was motivated by the #MeToo movement, a hashtag to spread stories of harassment or assault, to write a post about Graves. She discovered about 25 other girls had similar stories about the driving instructor.

“Everyone had this distinct story which was really crazy,” Miller Hall said. “You’re placed in a position where you are alone. You have no way to get out on your own, and that’s very scary.”

One in nine girls under the age of 18 experiences sexual assault or abuse at the hands of an adult, according to Rape, Abuse & Incest National Network. When in an uncomfortable or harmful situation, it is best to leave the situation if possible, although that is not always an option.

“Somebody might say, ‘You’re making me feel really uncomfortable, I would like to get out of the car now,’” Egan said. “Someone else might not feel like they can say that for whatever reason and can come up with something else and that is equally OK.”

Senior Natalie Scheele took lessons with Graves in 2016 and 2017 and said she also experienced disturbing behavior.

“When I take [prescription medication], my lips get really dry so I lick my lips whenever I take it and he would be like ‘Oh, the way you bit your lips, if I weren’t gay.’” Scheele said. “I thought that was so weird and he said that like 10 or 15 times throughout the whole drive. It made me really uncomfortable.”

Scheele says she wishes she stood up for herself early in the situation.

“It’s one of those situations where you don’t really know if you should speak up in the moment because that could make it more dangerous for yourself,” Scheele said. “I could have confronted him in a safer area, like at the end of the lesson.”

A charge of misdemeanor touching of a minor must be prosecuted within one year of the incident under California law, and there is a current San Francisco Police Department investigation into Graves.

Miller Hall says that no matter the degree of verbal or physical harassment, it is important to remember that all instances are valid.

“When you’re a teenager it can be really, really difficult,” Miller Hall said. “You feel so intimidated and you don’t want anyone to get in trouble or make it a big deal. I wasn’t raped or really physically assaulted beyond a kiss on my ear, but no one can downplay their own experiences. Anyone who feels uncomfortable even if it’s the slightest feeling of unease needs to say something when they feel it’s safe.”

Egan recommends to talk to someone — a help line, best friend, counselor or trusted adult, or even police officer — as soon as possible after leaving any uncomfortable or unsafe situation.

“The worst thing to do is keep it to yourself,” Egan said. “That’s what starts to erode other parts of you. It starts to define you and have all sorts of power over you that it shouldn’t. As soon as you say it to somebody else, it loses that power and becomes separate from you.”