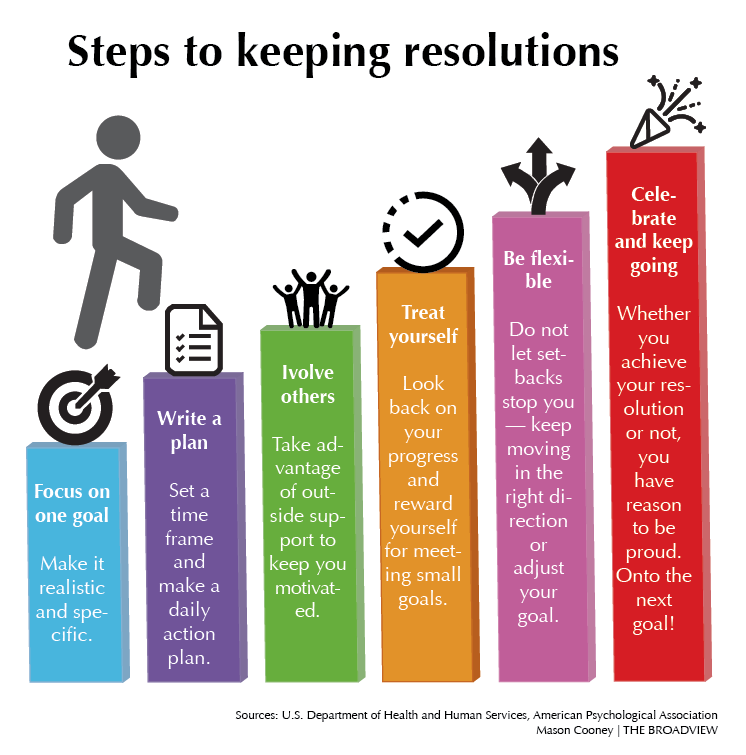 As the New Year’s buzz dies down, most resolutions get pushed aside and forgotten by early February, yet setting goals can still be a year-round technique for self-improvement.

“A change in routine is good — to say ‘Yes, my life is moving on, I’m doing something new,’” junior Poppy Cohen said. “It’s a nice way to mark the New Year because otherwise you get into too much of a habit.”

Cohen made a January resolution to take the stairs up to her apartment instead of the elevator, but was taking the lift again after two weeks. She says even though she tends to break resolutions before the end of January, she says she enjoys setting goals for herself anyway.

Like Cohen, freshman Bella Wasserman, who tried to limit her phone usage to one hour a day, broke her resolution after one week.

“I could have put more effort into putting my phone away,” Wasserman said, “but it’s just hard because phones are so addicting.”

While Wasserman and Cohen both say they could have been successful with a little more will power, they are not alone. About 80 percent of resolutions fail by the second week of February, according to Business Insider.

“As a species we are driven to grow and develop,” leadership coach Liz Cornish said. “Making resolutions is a clean way of putting that motivation into play, but habits are sometimes hard to let go.”

Cornish, who specializes in women’s consulting, says the most common resolutions she sees have to do with either physical development — such as getting in shape, eating better or promoting personal care — or intellectual development, including reading more or learning another language.

Cornish says people typically break their resolutions because they associate change with loss or they do not perceive the goal as an important priority.

“Change is hard, but it’s great to have goals,” Cornish said. “If goals are well stated and have a good sense of purpose, they can make us feel really good about ourselves and continue to develop.”

Cornish encourages women to set resolutions that they look forward to and to not forget to celebrate small achievements.

“Frame them in the positive,” Cornish said. “Say something like ‘I’m going to find an exercise routine that I really enjoy,’ instead of ‘I’m going to make myself workout three times a week.’”

Cornish also recommends individuals continue towards their goals when they fail instead of giving up.

“You shouldn’t be 100 percent sure that you’re going to make your goal or else it’s not that satisfying,” Cornish said. “Don’t beat yourself up if you don’t. Just keep moving in the right direction.”

While Wasserman and Cohen both say they see resolutions as an opportunity to get rid of old habits, Cornish says that there is not a specific time for self-improvement.

“Why wait?” Cornish said. “My motto is, ‘If in doubt, do.’ Goals give us motivation, and I don’t think we have to wait until New Year’s Eve to set them.”